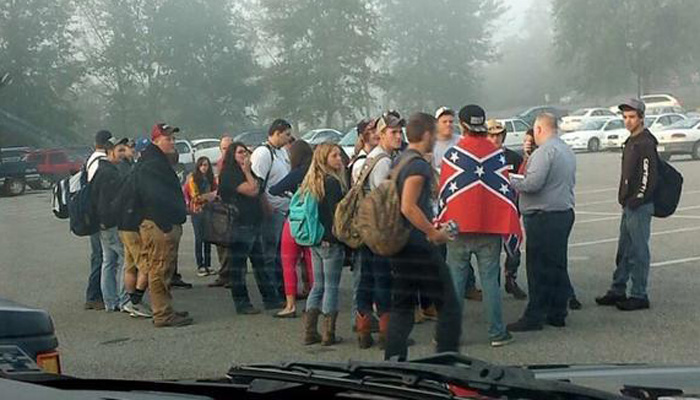 In 2000, the 10th Circuit Court of Appeals upheld a Kansas high school's suspension of a student who drew a picture of a Confederate flag in math class in violation of the school's racial harassment policy. High school student expression regarding the Confederate flag has continued to be an issue at schools. In this photo a group of students gather in 2015 at Christiansburg High School in Virginia as part of a protest against school policy forbidding the wearing of Confederate flag apparel. (Photo by Faze039423 via Wikimedia, CC BY-SA 4.0)

In West v. Derby Unified School District, 206 F.3d 1358 (10th Cir. 2000), the Tenth Circuit Court of Appeals ruled that school officials in Kansas did not violate the First Amendment rights of a middle school student when they suspended him for drawing a picture of the Confederate flag in math class.

The appeals court reasoned that the drawing violated the school’s racial harassment and intimidation policy, which the school district passed with input from many members of the community after several incidents of racial tension and violence at the local high school.

Student T.J. West and his father Terry contended that school officials violated T.J.’s First Amendment, equal protection, and due process rights. With respect to the First Amendment, the Wests claimed that T.J.’s drawing was peaceful and that the school’s racial harassment policy was overbroad.

A federal district court rejected the Wests’ claims, and a three-judge panel of the Tenth Circuit affirmed.

The Court applied the “substantial disruption” test from Tinker v. Des Moines Independent Community School District (1969), concluding that school officials were justified in forecasting that drawings of Confederate flags in instances like T.J.’s could disrupt the educational environment.

The appeals court also rejected an overbreadth challenge, reasoning that the policy has never been applied to a student for possessing a Confederate flag picture in a book or for some other “legitimate educational . . . depictions of the Confederate flag.”

The Wests appealed to the Supreme Court, which denied their petition on October 2, 2000.