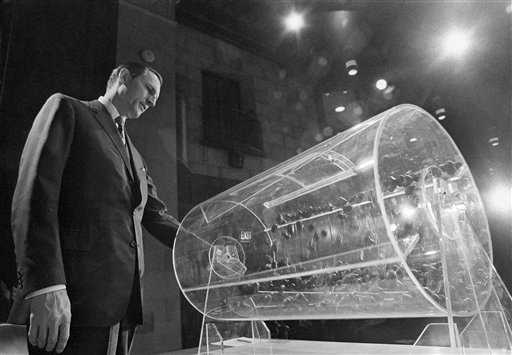 Draft Director Curtis W. Tarr spins one of the two Plexiglas drums in Washington on February 2, 1972 as the fourth annual Selective Service lottery for the Vietnam War begins. A year earlier, the Supreme Court had upheld a ruling denying draft exemption to a man who had refused to participate in the Vietnam War but would have participated in a war of self-defense. (AP Photo/Charles W. Harrity, used with permission from the Associated Press.)

The Supreme Court decision in Gillette v. United States, 401 U.S. 437 (1971), upheld a lower court ruling denying a draft exemption to a man who on the basis of humanist principles had refused to participate in the Vietnam War but who would have fought in a war of self defense.

Eight justices considered the exemption denial to be a valid interpretation of the Military Selective Service Act of 1967 and as consistent with the religion clauses of the First Amendment. The Court took a similar position in the consolidated case Negre v. Larson, involving a Roman Catholic who had asked to leave military service after basic training because he had concluded that the Vietnam War was unjust.

These decisions limited the ruling in Welsh v. United States (1970), which had extended the rights of conscientious objection to individuals whose opposition to war stemmed from moral and ethical beliefs that occupied a similar position to religious views.

In the Court’s opinion for Gillette, Justice Thurgood Marshall observed that the selective service statute extended conscientious objector status only to those “conscientiously opposed to participation in war in any form.” Neither this language, nor the legislative history of the bill, nor past cases could justify exempting Gillette or Negre.

Marshall argued that one of the central purposes of the First Amendment was that “of ensuring governmental neutrality in matters of religion.” Although expressing some discomfort with the wall of separation analogy, he also observed that the establishment clause was designed to ensure that laws were “secular in purpose, evenhanded in operation, and neutral in primary impact.” On its face, the law does not discriminate among religions.

Moreover, Congress had legitimate reasons for distinguishing between those who opposed all wars and those who disfavored only some of them. Acceptance of the latter claim would lead to greater uncertainty and “erratic or even discriminatory decisionmaking in administrative practice.”

These claims were enough to pass the establishment clause hurdle. In a similar manner, the free exercise clause was not designed to eliminate all “incidental burdens felt by persons in petitioners’ position.”

In dissents to both cases, Justice William O. Douglas pointed to the sincerity of both litigants and thought that the law weighed too heavily on the right of conscience.