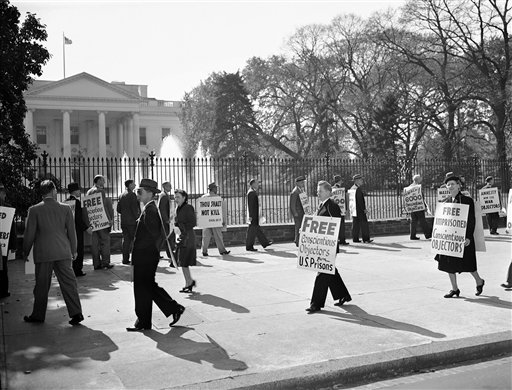 Conscientious objectors to military service reject serving in the fighting forces because it is against their religious beliefs. The Supreme Court in Sicurella v. United States (1955) overturned the conviction of a Jehovah’s Witness who was refused conscientious objector status. This 1946 photo shows members of a delegation of 36 ministers picket the White House carrying signs asking for freedom for imprisoned conscientious objectors. (AP Photo/John Rous, used with permission from the Associated Press)

The Supreme Court in Sicurella v. United States, 348 U.S. 385 (1955), overturned the conviction of a Jehovah’s Witness who had refused to enlist in the armed forces because of his religious beliefs.

Jehovah's Witness said he was conscientious objector, draft board disagreed

A draft board had decided that Anthony Sicurella, a long-time Jehovah’s Witness, could not be a conscientious objector because he did not, in its opinion, object to participation in war in any form.

In answering questions, he had indicated his willingness to act in self-defense or in defense of fellow Jehovah’s Witnesses if they were attacked and because he allowed that he believed in “theocratic” wars and would be willing to fight for Jehovah at the Battle of Armageddon.

The Supreme Court, however, found Sicurella to be legitimately exempt from military induction.

In the opinion for the Court, Justice Tom C. Clark argued that when Congress adopted the law on conscientious objection to military service it “had in mind real shooting wars,” not the kind of spiritual battles or the anticipated battle at the world’s end in which many people believed. Clark wrote that Sicurella’s statements to the draft board had “neither the bark nor the bite of war as we unfortunately know it today. It is difficult for us to believe that Congress had in mind this type of activity when it said the thrust of conscientious objection must go to ‘participation in war in any form.’ ”

Reed based his position on the ground that Sicurella’s willingness to fight for “Kingdom Interests” showed that the language of the statute did provide an exemption for him. Minton’s dissent centered on his belief that the actions of the Selective Service Board should be final absent “arbitrary or capricious” action, which he did not believe had occurred in this case.