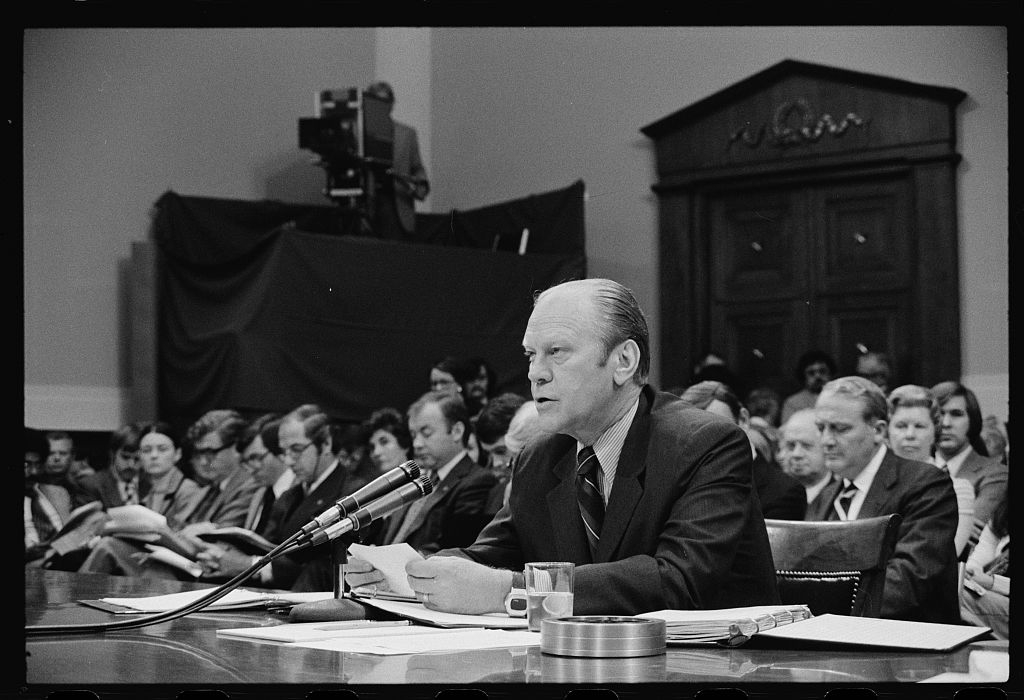 President Gerald Ford appears at the House Judiciary Subcommittee hearing on pardoning former President Richard Nixon in Washington, D.C. on Oct. 17, 1974. The pre-publication of an excerpt from President Ford's decision at this hearing from his autobiography A Time To Heal was what inititiated Harper & Row v. Nation Enterprises. (Thomas J. O'Halloran / U.S. News & World Report Magazine Photograph Collection via Library of Congress PPOC)

In a decision attempting to balance First Amendment free speech rights with copyright values, the Supreme Court held in Harper and Row v. Nation Enterprises, 471 U.S. 539 (1985), that a prepublication of approximately 300 words of an excerpt from President Gerald Ford's memoir, A Time to Heal, was not an example of “fair use” but a copyright infringement.

Magazine writer reviewed, published part of President Ford's memoir before it was released

In the excerpt, President Ford explained for the first time publicly his reasoning for pardoning President Richard M. Nixon of any wrongdoing in the Watergate break-in and cover-up. Harper and Row had an agreement for Time magazine to be the first to review Ford’s book. A writer for The Nation magazine somehow got possession of galley proofs of the book and wrote a lengthy review that appeared prior to the book’s publication and to any Time review. Time canceled the contract with Harper and Row, and Harper and Row sued The Nation for copyright infringement.

Writing for a 6-3 majority, Justice Sandra Day O’Connor explained the balance between the First Amendment and copyright laws. The First Amendment protects the dissemination of information, whereas copyright laws protect the expression of authors for the purpose of encouraging them to create and disseminate more works for the benefit of society. She observed that “the Framers intended copyright itself to be the engine of free expression.

By establishing a marketable right to the use of one’s expression, copyright supplies the economic incentive to create and disseminate ideas.” Because copyright protects only the author’s expression and not the ideas or facts, the First Amendment’s protection for the dissemination of ideas is not lessened. In addition, the doctrine of fair use allows even the use of some copyrightable expression in instances where the uses are particularly beneficial to society and not particularly harmful to the copyright owner.

Fair use unclear when dealing with unpublished works

The opinion did not analyze all of the fair use factors as enumerated in the Copyright Act of 1976. Rather, the Court held that the unpublished nature of the original material “is ‘a key, though not necessarily determinative, factor’ tending to negate a defense of fair use.” O’Connor wrote, “Under ordinary circumstances, the author’s right to control the first public appearance of his undisseminated expression will outweigh a claim of fair use.”

Justice William J. Brennan Jr.’s dissent took issue with the majority’s limited fair use analysis. He argued that journalistic use of a limited amount of creative expression, even if unpublished, should be allowed in order not to “stifle the broad dissemination of ideas and information copyright is intended to nurture.”

Fearing that there could never be fair use in unpublished works, librarians and researchers exhorted Congress to amend the Copyright Act. In 1992 Congress added a sentence to the Fair Use provisions (17 U.S.C. 107) indicating “The fact that a work is unpublished shall not itself bar a finding of fair use if such finding is made upon consideration of all of the above factors.”