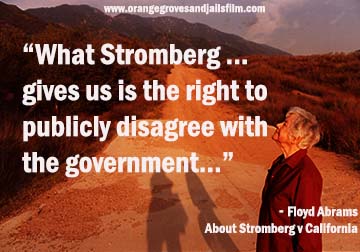 Photo illustration of Stromberg, courtesy of Judy Branfman, producer and director of an in-progress documentary on Yetta Stromberg, her great aunt. The documentary is titled The Land of Orange Groves and Jails, which Branfam says is a title taken from a story written by Upton Sinclair about Stromberg's First Amendment case for hosting a reproduction of the Soviet red flag.

In Stromberg v. California, 283 U.S. 359 (1931), the Supreme Court ruled 7-2 that Yetta Stromberg’s conviction for flying a reproduction of the red flag of the Soviet Union and the Communist Party of the United States violated the free speech protection of the First Amendment.

California law made it illegal to fly a red flag as an emblem of opposition to U.S. government

Stromberg, a member of the Young Communist League, worked at a summer camp for children. Her duties included directing the children during a daily ceremony in raising the red flag. At the ceremony, the children also saluted the flag and recited a pledge of allegiance “to the worker’s red flag, and to the cause for which it stands; one aim throughout our lives, freedom for the working class.”

Because of her participation in the flag ceremony, Stromberg was convicted of violating Section 403a of the California Penal Code, which criminalized displaying a red flag in a public place or in a meeting place under three conditions: (1) “as a sign, symbol or emblem of opposition to organized government,” or (2) “as an invitation or stimulus to anarchistic action,” or (3) “as an aid to propaganda that is of a seditious character.”

At Stromberg’s trial, the general verdict of guilty that was delivered failed to distinguish which particular part of the statute Stromberg had violated. She appealed, alleging a violation of her free speech rights.

Chief Justice Charles Evans Hughes wrote the majority opinion for the Supreme Court. In the opinion, he made it clear that the free speech clause of the First Amendment was one of the liberties protected from interference by the states under the Fourteenth Amendment. And yet, Chief Justice Hughes, relying on Gitlow v. New York (1925), clarified that states could place limits on any speech that incited to violence and threatened the overthrow of organized government.

Because the second and third clauses of the California statute were construed by the state courts as relating to incitements to violence, a conviction based on either count could be upheld.

The problem was that the first clause of the statute could be interpreted as including peaceful opposition to a political party’s control of government by patriotic members of another political party who did not agree with how the party in power was exercising that power. It also might be interpreted as including legal means of peaceful and orderly opposition to government — opposition protected by the Constitution.

An interpretation of the statute that stifled such legitimate political discourse, even if it were symbolic, such as in the form of a red flag, threatened the democratic process. The first section of the California statute was, therefore, repugnant to the guaranty of liberty contained in the Fourteenth Amendment. Stromberg’s conviction had to be overturned, because the general verdict did not allow the Court to know which clause of the California statute she had been convicted of violating.

The Court’s decision in Stromberg remains important in First Amendment jurisprudence for its holding that certain forms of nonverbal expressive conduct — such as waving a red flag — are protected by the First Amendment.