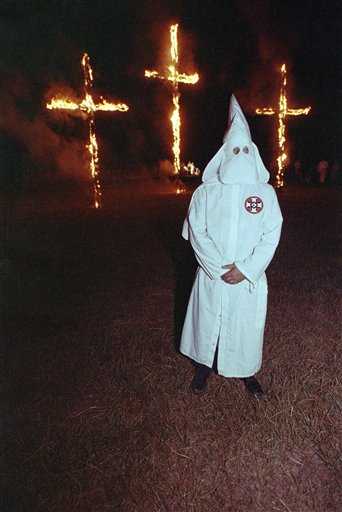 In R.A.V. v. St. Paul 505 U.S. 377 (1992), the Supreme Court struck down a city ordinance that made it a crime to place a burning cross or swastika anywhere “in an attempt to arouse anger or alarm on the basis of race, color, creed, or religion.” The Court’s decision, citing violation of the First Amendment, overturned a cross-burning conviction. In this photo, local Ku Klux Klan organizer Steve Gullet pauses after he and other group members burned three cross during a rally at a rural Springfield, Missouri farm, June 22, 1991. The event marks the first time in two decades that the Klan has burned crosses in the state. (AP Photo/Jeffrey Z. Carney, used with permission from the Associated Press)

In R.A.V. v. St. Paul 505 U.S. 377 (1992), the Supreme Court struck down a city ordinance that made it a crime to place a burning cross or swastika anywhere “in an attempt to arouse anger or alarm on the basis of race, color, creed, or religion.” The Court’s decision, citing violation of the First Amendment, overturned a cross-burning conviction.

Viktora was arrested for burning a cross to intimidate a family

Robert A. Viktora, a juvenile, along with others, assembled a crude cross by taping together broken chair legs and then burning the cross inside the fenced yard of the Joneses, a black family. He was arrested and charged under a bias-motivated crime ordinance of St. Paul, Minnesota. (Viktora was a minor at the time and therefore referred to in the case materials only by his initials.) Before Viktora’s trial, his attorney requested that the juvenile court dismiss the case, arguing that the ordinance violated the First Amendment in two ways: it was overbroad and impermissibly content based. The trial court agreed.

St. Paul appealed to the Minnesota Supreme Court, which reversed the trial court decision, holding that the ordinance prohibited only speech analogous to fighting words, a form of speech that the U.S. Supreme Court had ruled was not protected by the First Amendment in Chaplinsky v. New Hampshire (1942). The state supreme court also asserted that the ordinance was a narrowly tailored effort to accomplish a compelling state interest: protection of the community from crimes motivated by racial or other bias. Viktora appealed to the U.S. Supreme Court.

In the opinion for the unanimous Court, Justice Antonin Scalia noted that the St. Paul statute was meant to prohibit only expressions that served to cause outrage, alarm, or anger with respect to racial, gender, or religious intolerance. Other expressions designed equally to arouse anger or outrage on other bases were not prohibited. The ordinance therefore unconstitutionally singled out particular, content-based viewpoints. Scalia also contended that it was not reasonable for St. Paul to assert that content-specific discrimination was necessary to achieve a narrow and compelling end. Even granting that the end was compelling, as the Minnesota high court had, Scalia argued that it could be achieved with an ordinance that did not address or prohibit only specific content.

Although the Court was unanimous in its decision, it was far from unified in its reasoning justifying it. Justices Harry A. Blackmun, Byron R. White, and John Paul Stevens each wrote a concurring opinion joined by the other justices in whole or in part. They argued that the St. Paul ordinance was invalid not because of its content or viewpoint discrimination but because it was overbroad or insufficiently specific.

R.A.V. v. St. Paul represents an important step in the development of the Court’s viewpoint discrimination theory. It is not, however, the last word on cross burning or attempts to limit racially motivated hate speech. In Wisconsin v. Mitchell (1993), the Court upheld the enhanced sentences for individuals convicted of an assault when they had selected their victim on the basis of race, religion, or other biases. In Virginia v. Black (2003), the Court agreed that burning a cross with the intent to intimidate is a form of unprotected speech.

This article was originally published in 2009. David A. May, PhD, is the interim president of Eastern Washington University. He taught at EWU from 1999-2016 on topics such as Supreme Court politics and public policy, jurisprudence, and judicial process.