By David Schultz (Updated September 2017 by David L. Hudson Jr.)
Other articles in Categories of Laws and Proposed Laws 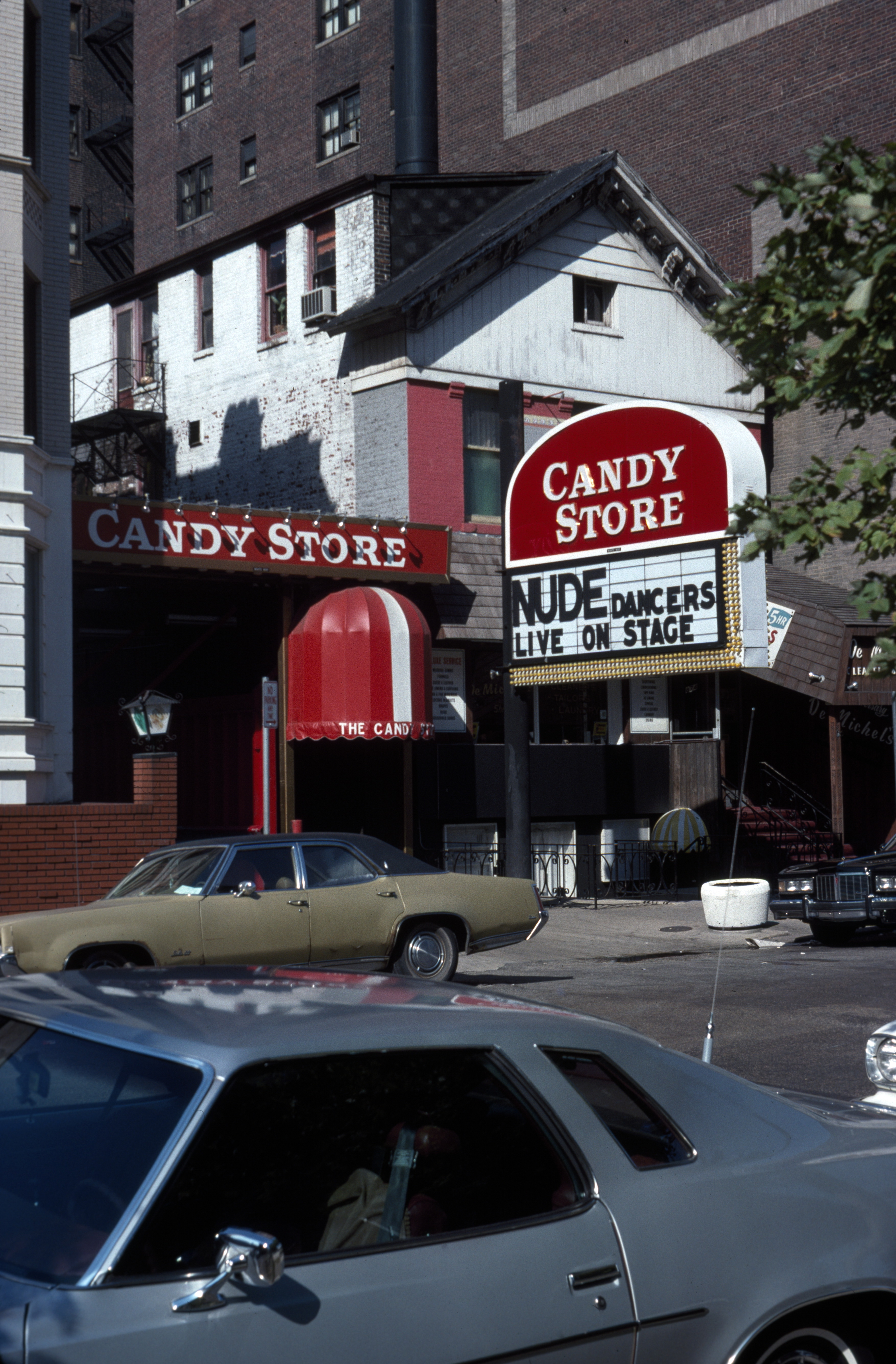 While a city's zoning regulations may not target non-obscene protected speech activities, the Supreme Court has given communities some power to utilize land use laws to regulate adult businesses under the secondary effects doctrine. (Photo of a strip club in Chicago in 1976, by William C. Brubaker, part of the C. William Brubaker Collection at University of Illinois at Chicago, via Flickr, CC BY-NC-SA 2.0)

State and local governments use zoning laws and ordinances to regulate the uses of land within their borders. While land-use zoning generally does not raise First Amendment issues, a government that imposes controls to prevent certain businesses from operating may violate the latter’s rights to free speech. First Amendment issues often arise when the government uses its zoning power to restrict the location of adult businesses that feature sexually explicit, but non-obscene, expression.

Burdensome, arbitrary and discriminatory zoning laws have been struck down

Zoning laws first came into existence in the United States in the early part of the twentieth century as various state and local governments sought to regulate property development to promote efficiency and to regulate use. For example, a community may wish to zone some areas for residential homes and others for manufacturing to prevent a factory from being built in the middle of an area full of homes.

In Buchanan v. Warley (1917), the Court struck down a city law segregating neighborhoods by race as a violation of the Fourteenth Amendment, effectively making it unconstitutional to use zoning for racially discriminatory purposes. However, in Eucid v. Ambler Reality (1926) the U.S. Supreme Court upheld zoning as a valid use of a state or local government’s police power.

Individuals have also successfully challenged zoning laws that were so onerous or burdensome that they effected an uncompensated taking of property contrary to the Fifth and Fourteenth Amendments. The Court has also overturned zoning laws when governments have imposed them in an arbitrary or capricious fashion, and plaintiffs may challenge zoning laws under the First Amendment when governments use such laws to suppress free expression.

First Amendment challenges most often arise when governments use zoning to regulate certain types of business establishments such as those engaged in adult entertainment. This might include businesses where nude or semi-nude dancing occurs, where adult movies are shown or sold, or where sexually orientated products are sold. The rationale that city officials use is called the secondary effects doctrine. Under this doctrine, city officials do not regulate adult businesses because they engage in offensive, unpopular expression, but because the businesses cause adverse secondary effects, such as increased crime and decreased property values.

Communities have attempted to use zoning laws to prevent adult entertainment businesses from operating within their borders. However, in decisions such as Sable Communications of California v. Federal Communications Commission (1989) the Court stated that “Sexual expression which is indecent but not obscene is protected by the First Amendment,” and government cannot totally restrict efforts to access this type of speech or communication. Thus, in cases such as Schad v. Mount Ephraim (1981) the Supreme Court ruled that while zoning may create adult zones or limit the placement of adult entertainment businesses within a community, the community may not zone them out completely or restrict them to small and highly inaccessible areas.

While zoning may not target non-obscene protected speech activities, the Supreme Court has given communities some power to utilize land use laws to regulate adult businesses under the secondary effects doctrine. In Young v. American Mini Theatres (1976), a divided Supreme Court upheld a city zoning ordinance that prohibited the operation of any “adult” movie theater, bookstore, and similar establishments within 1,000 feet of any other such establishment or within 500 feet of a residential area. The majority ruled that such a zoning ordinance was a valid time, place and manner regulation because the speech in question enjoyed lesser First Amendment protection and because the law did not totally ban these establishments from the community.

The Court further developed this doctrine in City of Renton v. Playtime Theatres, Inc. (1986), ruling that zoning ordinances that seek to regulate the secondary effects of adult entertainment, such as increased crime or decreased property values, do not violate the First Amendment. In Barnes v. Glen Theatre, Inc. (1991), the Court upheld an ordinance (not a zoning law) that required nude dancers to wear pasties or g-strings. Here the Court, relying on the logic of Young and Renton, asserted that totally nude dancing was only marginally protected by the First Amendment and therefore could be regulated.  The Court continued its use of the secondary-effects doctrine in City of Los Angeles v. Alameda Books (2002). The case concerned a challenge to a ban on multiple-use adult businesses in the same building.

The Court has also upheld other zoning laws or ordinances meant to regulate activities within certain neighborhoods or to abate nuisances. In Frisby v. Schultz (1988), the Court upheld against a First Amendment challenge to a law barring residential picketing. In City of Cincinnati v. Discovery Network (1993), the Court upheld a restriction on the distribution of advertisements by way of free-standing news racks placed on sidewalks, stating that the regulation of commercial speech here was reasonable to prevent littering. Finally, in cases such as Village of Belle Terre v. Boraas (1974) the Court held that zoning ordinances that barred more than a certain number of unrelated individuals from living together did not violate First Amendment associational rights.