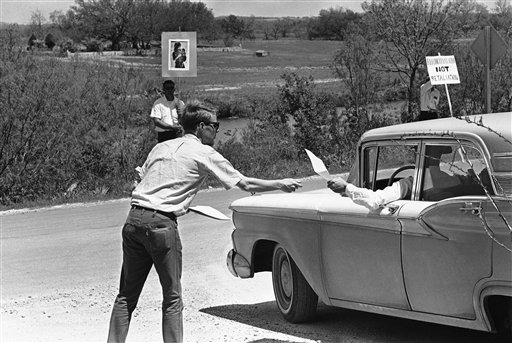 The distribution of handbills has been a common way for people to distribute ideas about issues and gain support. Schneider v. State (1939) invalidated several city ordinances that restricted the distribution of handbills saying the restrictions infringed upon the First Amendment rights of free speech. In this 1965 photo, an unidentified demonstrator protesting the United States policy in Vietnam, hands out handbills to churchgoers near the LBJ Ranch at Stonewall, Texas (AP Photo/Ferd Kaufman, used with permission from the Associated Press)

Los Angeles, California; Milwaukee, Wisconsin; and Worcester, Massachusetts, had passed ordinances prohibiting the distribution of all handbills on city streets and sidewalks that resulted in subsequent littering. Irvington, New Jersey, had one that also limited house-to-house distributions, except for cases in which individuals had obtained a permit from the chief of police.

These cities had applied the laws to individuals distributing handbills involving the Spanish Civil War, a labor dispute, a protest meeting involving unemployment insurance, and the faith of Jehovah’s Witnesses.

In the opinion for the 8-1 majority, Justice Owen J. Roberts recognized the rights of municipalities to keep streets open to traffic and other reasonable restrictions, but added that localities must recognize that the freedoms of speech and press are “fundamental personal rights” that lie “at the foundation of free government by free men.”

The Court had previously emphasized such rights in striking down discretionary licensing provisions in Lovell v. City of Griffin (1938) and Hague v. Committee for Industrial Organization (1939).

Court said there are less intrusive ways to reduce littering

The cities had attempted to distinguish their ordinances from these and similar cases on the basis that they were attempting to address the problem of littering.

Roberts asserted that there were less intrusive ways to accomplish this goal, including fining individuals who littered. In a similar vein, Irvington could find other methods of securing homeowners from trespasses and frauds other than by vesting the police chief with the power to censor through licensing. Justice James C. McReynolds dissented without a written opinion.