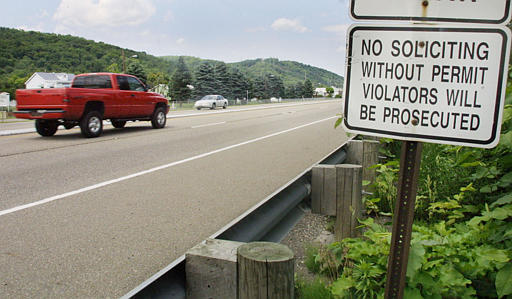 In Watchtower Bible and Tract Society v. Village of Stratton (2002), the Supreme Court overturned a city ordinance in Stratton, Ohio, that required a permit for door-to-door solicitation, ruling it infringed on free speech rights. In this file photo, a sign informs motorists of the solicitation guidelines in Stratton. (AP Photo/Gary Tramontina, used with permission from the Associated Press)

In Watchtower Bible and Tract Society v. Village of Stratton, 536 U.S. 150 (2002), the Supreme Court struck down a Stratton, Ohio, ordinance making it a misdemeanor to canvass or solicit door-to-door without a permit.

The Court ruled 8-1, in an opinion by Justice John Paul Stevens, that the ordinance violated First Amendment protections for anonymous political speech, religious and political canvassing, and pamphleteering. This case affirmed constitutional protection for anonymous advocacy.

Anonymous speech, pamphleteering, and door-to-door campaigning are integral parts of the American tradition. In colonial days, these expressive forms and practices shielded controversial views, such as those in Thomas Paine’s Common Sense, from British censorship. Later, they contributed to important public debates such as those spurred by the Federalist Papers championing the new Constitution.

Supreme Court rulings in two dozen cases involving Jehovah’s Witnesses — many in the 1930s and 1940s — have supported the right of small or unpopular groups to spread their messages through pamphlets and door-to-door evangelism.

Jehovah’s Witnesses are a missionary movement (they reject the title of church) that arose in late-19th-century America. They accept as an article of faith the scriptural obligation to preach on public streets and at the doorsteps of private homes. The Court has, however, allowed reasonable restrictions on the time and manner of such activities to protect against fraud and crime.

The village of Stratton sought to protect its residents against “flim-flam” artists and to preserve residents’ privacy by adopting the ordinance that made it a misdemeanor to canvass or solicit door-to-door without a permit. But Jehovah’s Witnesses and their parent organization, the Watchtower Bible and Tract Society of New York, countered that the ordinance threatened their First Amendment rights. The federal district and appeals courts upheld the ordinance, finding it content neutral.

In his opinion for the Court, Justice Stevens held that the importance of the affected speech so clearly outweighed the state’s interest in protecting the privacy of citizens and preventing crime and fraud that no discussion was needed of what First Amendment test applied. The ordinance both restricted more religious and political speech than was necessary to accomplish the government’s interests and failed to prevent fraud and crime. Moreover, it was an abrupt departure from the tradition of spontaneous speech, limiting the right of neighbors to talk with one another about political or religious issues. It also interfered with the anonymity needed by those who might fear official reprisal or social ostracism for their views.

In his dissent, Chief Justice William H. Rehnquist questioned the assertion that the criminal threat was insufficient to support the ordinance.

Stratton was prudent to anticipate that criminal activity could harm the village; after all, other localities had had problems with canvassers casing homes for burglaries. Rehnquist insisted that the Court apply the intermediate test, which revealed that the ordinance met the requirements that a law be content neutral, be narrowly tailored to meet a significant government interest, and offer ample alternatives for speech.