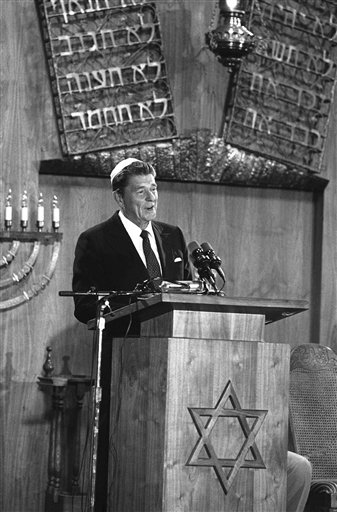 Former President Ronald Reagan wears a yarmulke in 1980, the headgear at the center of Goldman v. Weinberger (1986). The Court upheld the military's dress code prohibiting religious headgear. (AP Photo/Rasmussen, used with permission from the Associated Press.)

S. Simcha Goldman — an Orthodox Jew, an ordained rabbi, and a captain in the U.S. Air Force — worked as a clinical psychologist at the mental health clinic on his base. Goldman wore a yarmulke in accordance with Orthodox Jewish doctrine that males keep their heads covered at all times.

In 1981 Goldman was informed that the yarmulke violated Air Force Regulation (AFR) 35-10, a dress code that prohibits the wearing of headgear “except by armed security police in the performance of their duties.” Goldman disobeyed the regulation, received a letter of reprimand, and was warned that failure to obey AFR 35-10 could subject him to court martial.

Goldman then sued Secretary of Defense Caspar W. Weinberger, claiming that the military’s regulation prohibiting him from wearing his yarmulke violated his First Amendment rights to free exercise of religion. The government countered that “uniform dress and appearance standards serve the military’s interest in maintaining discipline, morale, and esprit de corps” and that AFR 35-10’s enforcement “is a necessary means to the undeniably critical ends of molding soldiers into an effective fighting force.” The government also noted that if it granted a religious exception in Goldman’s case, service members of other faiths might begin requesting exemptions involving more obtrusive headgear.

In a 5-4 opinion written by Justice William H. Rehnquist, the Court held that “when evaluating whether military needs justify a particular restriction on religiously-motivated conduct, courts must give great deference to the professional judgment of military authorities concerning the relative importance of a particular military interest.”

The dissenting justices argued that the air force’s justifications for the prohibition were unpersuasive and that the compelling state interest test — enunciated in Sherbert v. Verner (1963) for adjudicating First Amendment cases — required the Court to find for Goldman.

Case overruled by Congress in 1987

In 1987, Congress effectively overruled Goldman when it passed the Religious Apparel Amendment, permitting members of the armed forces “to wear an item of religious apparel while in uniform” if that item is “neat and conservative” and does not ”interfere with the performance of military duties.”

Subsequent debate centered on whether Goldman represented a repudiation of the compelling interest test. While many argued that the military context made Goldman a unique case, others viewed it as a substantial departure from the Sherbert standard that signified a shift in the Court’s free exercise jurisprudence in Employment Division, Department of Human Resources of Oregon v. Smith (1990) and subsequent cases.

This article was originally published in 2009. Brett Curry is Professor of Political Science at Georgia Southern University. His research centers on aspects of judicial politics and decision making. His scholarship has been published in a number of journals including the Journal of Politics, Law & Society Review, Law & Social Inquiry, American Politics Research, and Justice System Journal. He also coauthored two book--U.S. Attorneys, Political Control, and Career Ambition (2019, with Banks Miller) and Decision Making by the Modern Supreme Court (2011, with Richard Pacelle and Bryan Marshall).