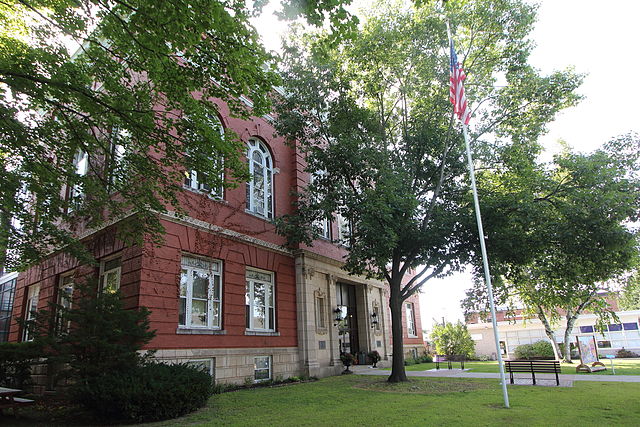 The Supreme Court decision in Chaplinsky v. New Hampshire (1942) established the doctrine of fighting words, a type of speech or communication not protected by the First Amendment. The case involved a Jehovah's Witness who made inflammatory statements near the city hall of Rochester, New Hampshire, shown here in 2013. (Image via Wikimedia Commons, CC BY-SA 3.0)

The Supreme Court decision in Chaplinsky v. New Hampshire, 315 U.S. 568 (1942), established the doctrine of fighting words, a type of speech or communication not protected by the First Amendment.

Walter Chaplinsky, a Jehovah’s Witness, was distributing religious pamphlets and speaking one afternoon in Rochester, New Hampshire, when a crowd gathered around him.

Chaplinksy was convicted for his statements about the city marshal

As Chaplinsky railed against organized religion, the crowd became restless. A city marshal approached Chaplinsky but reminded the crowd that Chaplinsky was within the law. After leaving the scene, the city marshal received word of a riot ensuing where Chaplinsky was speaking. As he headed back to the scene, the marshal came upon Chaplinsky being escorted to a police station by another police officer. Upon seeing the marshal, Chaplinsky uttered the phrases “You are a God damned racketeer” and “a damned Fascist and the whole government of Rochester are Fascists or agents of Fascists.”

Chaplinsky was arrested for violating a New Hampshire law prohibiting the use of “offensive, derisive or annoying” words toward others or preventing them from going about their lawful business. Upon his conviction, Chaplinsky appealed, arguing that the state law limited his First and Fourteenth Amendment speech freedoms.

Justice Francis W. Murphy, writing for a unanimous court, held that certain written or spoken words are exempt from First Amendment protection when they instigate violent reactions by listeners.

Although most speech falls under the protection of the First Amendment freedom of speech, expressions that are “lewd and obscene, . . . profane, . . . libelous, and . . . insulting or ‘fighting’ words” cannot claim constitutional protection. Murphy argued that fighting words “by their very utterance inflict injury or tend to incite an immediate breach of the peace.”

He added that whenever such speech fails to “contribute to the expression of ideas [or] possessed any ‘social value’ for the truth,” the right to utter that speech can be limited by government when it seeks to promote the “social interest in order and morality.”

Subsequent cases have narrowed the fighting words doctrine as elaborated in Chaplinsky.

In Cohen v. California (1971), the Court rejected a fighting words application to a young man who wore a leather jacket with the words “fuck the draft” on it in a public courthouse.

In R.A.V. v. St. Paul  (1992), the justices ruled as unconstitutional a St. Paul ordinance classifying as hate speech words “that insult, or provoke violence, ‘on the basis of race, color, creed, religion or gender.’ ” Although the Court has never formally overruled Chaplinsky, its later decisions have limited it. Some lower courts, however, still cite Chaplinsky and apply the fighting words doctrine to prohibit speech highly critical of law enforcement officers, particularly when the speech is accompanied by unlawful or threatening conduct.