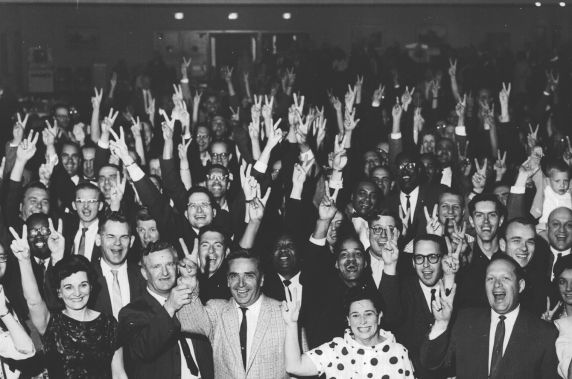 In 1977, the Supreme Court ruled in a Detroit case that requiring nonunion government employees to pay a service fee equal to union fees did not violate the First Amendment as long as the fees were not used for political purposes. (This photo from May 11, 1964 shows members of the Detroit Federation of Teachers when they found out they won the collective bargaining election over the Detroit Education Association. Photo courtesy of Walter P. Reuther Library, Archives of Labor and Urban Affairs, Wayne State University)

In Abood v. Detroit Board of Education, 431 U.S. 209 (1977), the Supreme Court unanimously ruled that no violation of the First and 14th Amendments existed in an arrangement under which nonunion government employees represented by a union had to pay a service fee equal in amount to union fees as a condition of their employment.

On First Amendment grounds, however, the Court prohibited the union from using the service fees for political and ideological purposes opposed by the objecting employees and unrelated to the union’s collective bargaining activities.

Detroit nonunion teachers did not want to pay dues

Detroit public school teachers were unwilling to pay dues to the union representing teachers employed by the Detroit Board of Education. They accused the union of engaging in political activities that they opposed and that were unrelated to the union’s collective bargaining purposes.

Court said the dues did not violate the First Amendment

Relying in part on its decisions in Railway Employees’ Department v. Hanson (1956) and International Association of Machinists v. Street (1961), the Court in an opinion by Justice Potter Stewart in Abood asserted that insofar as the charges required of the nonunion employees were used for funding union expenditures for collective bargaining, contract administration, and grievance adjustment activities, this “agency shop” arrangement was constitutionally valid.

The Court had held in Hanson that requiring financial support for a collective bargaining agency by those who received the agency’s benefits did not violate the First Amendment. In Street, the Court ruled that unions could not use agency shop funds for political purposes opposed by nonunion members.

In Harris v. Quinn, (2014), in a 5-4 decision written by Justice Samuel Alito, the U.S. Supreme Court refused to extend the Abood precedent to require personal health care workers in Illinois who refused to join a union to pay union dues.  In Friedrichs v. California Teachers Ass’n, 578 U.S ____  (2016), when only eight justices were serving in the aftermath of the death of Justice Antonin Scalia, an equally divided Court affirmed a decision by the 9th U.S. Circuit Court of Appeals that rejected a challenge by a teachers union to the decision in Abood.

In 2018, the Supreme Court looked at a similar agency shop arrangement and ruled it unconstitutional. In a 5-4 decision written by Justice Alito in Janus v. American Federation of State, County, and Municipal Employees, Council 31, the Court ruled that an Illinois law requiring non-union members to pay agency fees for the union to engage in collective bargaining and related activities amounts to an unconstitutional compulsion of speech in violation of the First Amendment.

Salmon A. Shomade, J.D., Ph.D., is an Associate Professor of Political Science at Oxford College of Emory University and an Adjunct Professor of Law at Emory University Law School. Dr. Shomade is the author of Decision-making and Controversies in State Supreme Courts (2018). This article was published in 2009 when Professor Shomade was at University of New Orleans. (The article was upated in 2019 by encyclopedia staff with information about the Janus decision.)