By Artemus Ward
Other articles in Issues Related to Religion 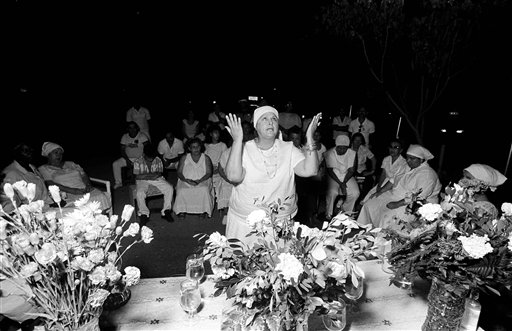 Head santera Carmen Pal leads a Santería service in Hialeah, Florida, in 1987. Members of the Lukumi Babalu-Aye church held their first service in the parking lot of the property owned by the church's priest after the church was denied an occupancy permit due to their practice of animal sacrifice. The Supreme Court later said the city ordinance prohibiting animal sacrifice violated the First Amendment and targeted the religion. (AP Photo/Raul de Molina, used with permission from The Associated Press)

The Supreme Court addressed the constitutionality of animal sacrifice for religious purposes in Church of the Lukumi Babalu Aye v. City of Hialeah (1993), voting unanimously to strike down a set of local ordinances prohibiting the practice because they specifically targeted the Santería religion.

At the same time, the Court continued to be divided over the appropriate test to determine the constitutionality of free exercise claims.

Santería combines elements of Roman Catholicism and some African religious practices. It originated in West Africa, and adherents brought it to Cuba during the slave trade and then to the United States following the Cuban revolution.

Some Santeríans practice animal sacrifice as part of their religious ritual and belief. They cut the throats of chickens, goats, sheep, or turtles, which are often eaten later as part of religious ceremonies involving weddings, births, and deaths.

In 1987 a group of Santeríans made plans to open a church in Hialeah, Florida. In response, the city council passed a number of ordinances limiting animal sacrifice, which the city defined as “to unnecessarily kill, torment, or mutilate an animal in a public or private ritual or ceremony not for the primary purpose of food consumption.”

The city argued that there were considerable health risks involved with feeding, housing, slaughtering, and disposing of animals in locations not properly zoned for these practices. They estimated that as many as 10,000 animals were slaughtered each year in areas of the city not so zoned.

The city also cited a concern for animal cruelty as another reason for the regulations.

The Supreme Court voted 9-0 to strike down the ordinances with Justice Anthony M. Kennedy delivering the opinion of the Court. Despite the unanimous vote, Justices Antonin Scalia, David H. Souter, and Harry A. Blackmun each wrote separate concurring opinions.

The justices spent most of their time debating the new free exercise test articulated in Employment Division, Department of Human Resources of Oregon v. Smith (1990).

In Smith, Scalia said that neutrality should be the standard used to adjudicate free exercise claims. The neutrality standard had replaced the longstanding free exercise test from Sherbert v. Verner (1963) that government could only burden religious practice if a compelling state interest existed and the government used the least-restrictive means of achieving that interest. The neutrality standard was much easier for governments to meet than was the compelling interest test.

Kennedy adopted a hybrid approach, explaining that “a law failing to satisfy [the requirements of neutrality and general applicability] must be justified by a compelling governmental interest and must be narrowly tailored to advance that interest.”

Kennedy said that despite government claims to the contrary, the ordinances were clearly targeted at Santeríans and were therefore not neutral. He then turned to the reasons given by the state and concluded that they were neither “compelling” nor “narrowly tailored.”

Kennedy noted that hunters, restaurants, and people who fish were not subject to the regulations, thereby making the government’s public health arguments a sham. He charged that the city’s animal cruelty argument also was a smokescreen, as authorities did not seek to prohibit kosher slaughter although that method was similar to the way Santeríans sacrificed animals: “simultaneous and instantaneous severance of the carotid arteries with a sharp instrument.”

Animal cruelty laws could be at issue in future

Justice Blackmun in his concurrence explained that one day the Court would have to decide the issue of animal sacrifice for religious purposes under a statute that met the neutrality test: “A harder case would be presented if [a religious group] were requesting an exemption from a generally applicable anti-cruelty law. The result in the case before the Court today, and the fact that every Member of the Court concurs in that result, does not necessarily reflect this Court’s views of the strength of a State’s interest in prohibiting cruelty to animals. ... The number of organizations that have filed ... briefs on behalf of this interest, however, demonstrates that it is not a concern to be treated lightly.”

Lukumi Babalu was essentially an easy case because the ordinances were written so poorly. The Court has not yet revisited the issue of animal sacrifice.