By John R. Vile
Related cases in Flag (Treatment of) 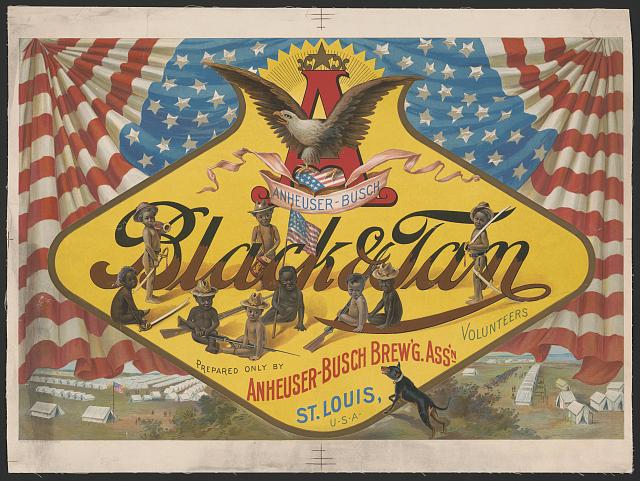 Anheuser-Busch advertisement circa 1899 showing African-American children of light and dark complexions wearing confederate hats and holdings swords and rifles like soldiers; the beer logo overlays the American flag while a military camp is seen in the background. In 1907, the Supreme Court upheld a state ban on using the American flag in advertising. (Photo via Library of Congress Prints & Photographs Online Catalog, public domain)

Written at a time before First Amendment protections of freedom of speech were applied to the states, the Supreme Court decision in Halter v. Nebraska, 205 U.S. 34 (1907), upheld a Nebraska state law that punished an individual for printing the American flag on a bottle of beer. Litigants had challenged Nebraska’s law, which made it a misdemeanor to use the flag for advertising purposes, as an improper concern for the state and as discrimination, since it permitted the printing of flags in noncommercial contexts.

State has right to ban use of the flag in advertising

Writing both prior to the application of the First Amendment to the states and to the development of protections for commercial speech, Justice John Marshall Harlan I decided that the state law in question did not conflict with any existing federal laws, and states had the right to legislate on the subject as a means of maintaining the flag “as an emblem of National power and National honor.” Arguing that if some could use the flag to advertise, then all might be able to do so, Harlan did not think it was discriminatory to bar all businesses alike from such usages.

Modern flag desecration is protected by the First Amendment