By Tom McInnis
Related cases in Flag (Treatment of) 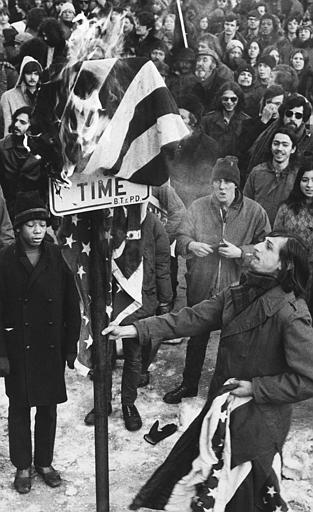 In this 1971 photo, anti-war demonstrators burn a U.S. flag atop a pole after marching to the State House in Boston in a protest of American involvement in Indochina. A few years earlier in 1969, the Supreme Court in Street v. New York sidestepped whether the First Amendment protected flag-burning, but overturned the conviction of a New York man under a law that banned both flag-burning and contemptuous speech about the flag. Years later, the Court found that the First Amendment protected flag burning as a form of symbolic speech. (AP Photo, used with permission from The Associated Press.)

In Street v. New York, 394 U.S. 576 (1969), the Court issued its ruling by citing the First Amendment’s protection of “words” but side-stepped the controversial “action” of flag-burning.

The Court overturned the appellant’s conviction under a New York statute that made it illegal to desecrate the American flag. The Court found it sufficient to focus on the statute’s inclusion of a ban on “words,” leaving the statute’s ban on “actions” to the consideration of a future bench.

The case took shape when Sidney Street learned that civil rights leader James Meredith had been shot and wounded in Mississippi. The Brooklyn-based Street took a flag and set it on fire at a street corner.

A small crowd gathered and brought the matter to the attention of a policeman. Street, a veteran who won a Bronze Star in World War II, admitted to the officer that the flag was his and that he had burned it. Street told the officer, “If they did that to Meredith, we don’t need an American flag.”

The policeman also heard Street tell the crowd, “We don’t need no damn flag.” Street was arrested and convicted of violating a New York statute that made it a criminal act to publicly mutilate, deface, defile, defy, trample upon, or cast contempt upon an American flag either by words or act.

Justice John Marshall Harlan II, writing for the majority, explained that the Court’s decision was a narrow one, resting on the answer to a crucial question. Specifically, the Court looked at whether Street’s words, rather than his actions, could have been an independent cause of his conviction and whether a conviction for uttering such words would violate the Constitution.

Relying on Stromberg v. California (1931), which had invalidated a conviction for displaying a red flag, Justice Harlan pointed out that a conviction could not be upheld if it rested on activity that the First Amendment protected. As in Stromberg, the lower court, in convicting Street, had not clarified whether Street’s conviction was based on his words or on his actions. Harlan examined four governmental interests that could reasonably be used to justify Street’s conviction.

Court found no government interest that would justify ban on speech

The first was a governmental interest in deterring people from vocally inciting others to commit unlawful acts. The Court found that in this case Street did not urge anyone to do anything unlawful. Instead, he advocated that the country should abandon one of its national symbols.

A second governmental interest was in preventing Street from uttering words so inflammatory that they would provoke others to retaliate physically against him, thereby causing a breach of the peace. Citing Chaplinsky v. New Hampshire (1942), the Court did not believe that Street’s remarks were so inherently inflammatory as to constitute “fighting words” that provoke the average person to retaliation.

A third governmental interest was in protecting the sensibilities of passers-by who might be shocked by appellant’s words about the American flag. The Court also rejected this limitation because any shock effect of appellant’s speech must be attributed to the content of the ideas expressed, and the Constitution firmly establishes that the public expression of ideas may not be prohibited merely because the ideas are themselves offensive to listeners.

A final governmental interest was in ensuring that citizens showed proper respect for a national emblem. Justice Harlan wrote that there was no doubt that the constitutionally guaranteed freedom of speech that allowed dissent to exist encompassed the freedom to express publicly one’s opinions about the flag, including those opinions that are defiant or contemptuous.

Whereas Street v. New York rested on the Court’s inability to distinguish whether New York had punished Street for his speech or his actions, in Texas v. Johnson (1989) and United States v. Eichman (1990), the Court subsequently decided that the First Amendment protects not only words but also the right of individuals to burn American flags as a form of public protest.