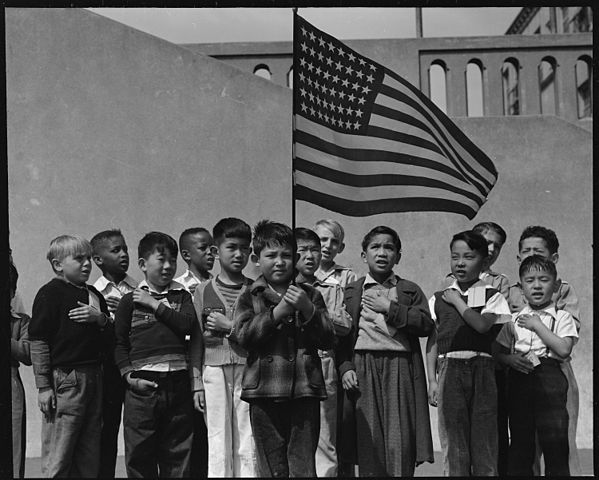 In this photo, children pledge the American at Raphael Weill Public School in San Francisco, California, in 1942. In a case later overruled by West Virginia State Board of Education v. Barnette (1943), the Supreme Court held in Minersville School District v. Gobitis, 310 U.S. 586 (1940), that state legislatures could require public school students to salute the U.S. flag and recite the Pledge of Allegiance without violating students’ speech and religious rights under the First and Fourteenth Amendments. (Image via the National Archives, public domain)

In a case later overruled by West Virginia State Board of Education v. Barnette (1943), the Supreme Court held in Minersville School District v. Gobitis, 310 U.S. 586 (1940), that state legislatures could require public school students to salute the U.S. flag and recite the Pledge of Allegiance without violating students’ speech and religious rights under the First and Fourteenth Amendments.

Minersville students refused to salute the flag for religious reasons

Public school students in Minersville, Pennsylvania, were required to begin the school day by reciting the Pledge of Allegiance while saluting the flag. However, two students, Lillian and William Gobitas (a court clerk erroneously changed the family’s last name to Gobitis), refused. They claimed that such a practice violated their religious principles; they were members of Jehovah’s Witnesses, who believed that saluting the flag was tantamount to paying homage to a graven image. After the students were expelled from school, their father filed suit, claiming that his children were being denied a free education and challenging the required pledge. Both the district court and the court of appeals ruled that the required salute and pledge were unconstitutional.

In an 8-1 decision, the Supreme Court overruled the lower courts by upholding the compulsory salute and pledge. Writing for the Court, Justice Felix Frankfurter acknowledged that the First Amendment sought to avoid the “bitter religious struggles” of the past by prohibiting the establishment of a state religion and guaranteeing the free exercise of all religions. Yet the scope of this right to religious liberty could pose serious questions when, as in this case, individuals sought exemption from a generally applicable and constitutional law.

Citing a series of cases, beginning with the Court’s decision upholding anti-polygamy laws in Reynolds v. United States (1879), Frankfurter reaffirmed the principle that religious liberty had never included “exemption from doing what society thinks necessary for the promotion of some great common end, or from a penalty for conduct which appears dangerous to the general good.” In this case, the “great common end” was achieved through repetition of a “cohesive sentiment” represented by the salute and pledge to the flag, “the symbol of our national unity” that transcended all other differences.

Frankfurter defined the question in Gobitis as whether the Supreme Court could decide “the appropriateness of various means to evoke that unifying sentiment without which there can ultimately be no liberties, civil or religious,” or whether that decision should be left to the individual state legislatures and school districts. For Frankfurter and the majority of the Court, the decision obviously belonged to the legislatures and school boards. Although multiple methods were available for instilling “the common feeling for the common country” and some of those methods “may seem harsh and others no doubt are foolish,” it was for the legislatures and educators to decide, not the Court. The Constitution did not authorize the Supreme Court to become “the school board for the country.”

Stone said the compelled pledge should be unconstitutional

In his dissent, Justice Harlan Fiske Stone presaged the Court’s opinion three years later in West Virginia State Board of Education v. Barnette (1943) that would overrule the Gobitis decision. Conceding that constitutional guarantees of personal liberty are “not always absolutes,” Stone wrote that when legitimate conflicts arise between liberty and authority, the Court should seek “reasonable accommodation between them so as to preserve the essentials of both.” The Constitution did not indicate in any way that “compulsory expressions of loyalty play any . . . part in our scheme of government.” Compelling the Gobitas children to publicly violate their “religious conscience” should be declared unconstitutional.