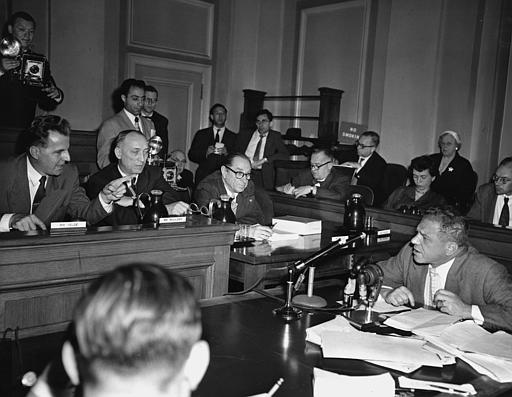 Braden v. United States, 365 U.S. 431 (1961) upheld the conviction of a person, Carl Braden, who refused to answer questions before the House Un-American Activities Committee (HUAC). In this photo from another similar incident, chairman of the House Un-American Activities Committee Harold Velde, R.-Ill., left, points a warning finger to witness Lionel Stander after the actor refused to answer questions whether he ever had been a communist, during open hearings in New York, May 6, 1953. (AP Photo, used with permission from the Associated Press)

This companion case to Wilkinson v. United States (1961) was decided by the same 5-4 Supreme Court vote. As in Wilkinson, the majority in Braden v. United States, 365 U.S. 431 (1961), upheld the conviction of a person who refused to answer questions before the House Un-American Activities Committee (HUAC).

HUAC may have targeted Braden

The evidence indicated that the committee may have targeted Carl Braden, a member of the Southern Conference Education Fund, for expressing fear that the committee was using charges of communist affiliation to target people like him who were speaking out against racial segregation.

Justice Potter Stewart’s majority opinion found little difference between Braden’s claim and the one the Court had rejected in Barenblatt v. United States (1959). Stewart believed that the committee had shown the pertinency of its questions and that it was clear that Braden had deliberately and intentionally refused to answer.

Black dissented due to his First Amendment absolutism

Justice Hugo L. Black was convinced that the committee had targeted Braden for his views on segregation, and he saw the decision as the result of flawed rulings in Beauharnais v. Illinois (1952) and Barenblatt.

Black posed his own First Amendment absolutism against the majority’s more malleable standards and denied “that this Nation’s ability to preserve itself depends upon suppression of the freedoms of religion, speech, press, assembly and petition.”

In a separate dissent, Justice William O. Douglas observed that HUAC was operating under the same broad authorization that the Court had questioned in Watkins v. United States (1957).

Douglas thought the committee’s attempt to classify Braden as a communist amounted “to little more than innuendo.”