By Allison Hayward (Updated June 2017 by John R. Vile)
Other articles in Legal Terms and Concepts Related to Speech, Press, Assembly, or Petition 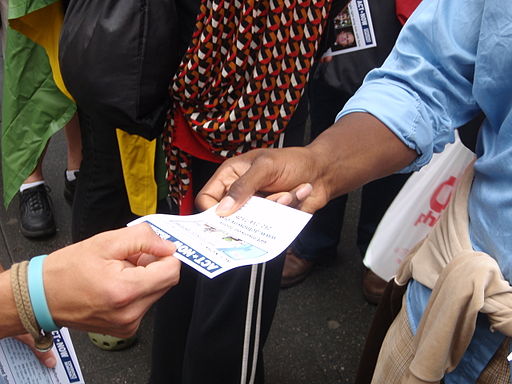 The Supreme Court has protected anonymous speech under the First Amendment in areas of political activity, balancing it against competing interests, such as disclosures of campaign donations and spending. For example, in McIntyre v. Ohio Elections Commission, it struck down an Ohio elections law that prohibited anonymous campaign literature after a woman was found in violation for distributing leaflets opposing a proposed school tax levy without her name on it as the author. (Photo of a volunteer handing out political literature at a health care reform rally, taken by ACT NOW, via Wikimedia Commons, CC-BY-S.A. 3.0)

Speakers and writers may seek anonymity as protection against prosecution, harassment, abuse and invasions of their privacy. The government and others may seek the identification of anonymous speakers in pursuing action against fraud and defamation or to provide information to the public and discourage corruption and the appearance of corruption.

The Supreme Court has protected anonymous speech under the First Amendment, but as with other constitutional rights, it has balanced protection against competing interests, notably in the areas of political activity and campaign finance.

Cases in which the Supreme Court has protected anonymous speech

From America's earliest days, speakers addressing controversial public questions have sought anonymity. The authors of the Federalist Papers, which supported ratification of the Constitution, published under the pseudonym Publius.  Revolutionary-era pamphleteers published under assumed names, often to escape prosecution.

Protection of anonymity as part of speech and association rights reached its highwater mark in a series of Supreme Court decisions protecting civil rights activists.

Yet, in Lewis Publishing Co. v. Morgan (1913), the court decided that if a publication seeks to qualify for a special postage rate or “privilege,” the government is justified in asking that publishers register their name and addresses with the postmaster general.

The Supreme Court has been less protective of anonymity in the arena of campaign finance.

In Buckley v. Valeo (1976), the court upheld compelled disclosure of campaign contribution information while keeping open the possibility that certain aggrieved groups might not need to disclose if they could show a record of threats, harassment or reprisals.

In Brown v. Socialist Workers ’74 Campaign Committee (1982), the Socialist Workers Party showed a sufficient record of harassment to receive a constitutional exemption from Ohio’s disclosure laws and is the only group to date that has done so.

The tension between the protection of anonymity in some cases and the recognition of a state interest in compelled disclosure in others was left unresolved in the court’s decision in McConnell v. Federal Election Commission (2003).

The court in McConnell upheld the disclosure requirement of the Bipartisan Campaign Reform Act that a person spending $10,000 on an electioneering communication, or donating $1,000 to a group for that purpose, report it with the Federal Election Commission. The court found the requirement “served important state interests . . . [in] providing the electorate with information, deterring actual corruption and avoiding its appearance, and gathering data necessary to enforce more substantive electioneering restrictions.”

That opinion asserted that McIntyre, which held political disclosure unconstitutional, should be distinguished from McConnell without explaining the basis for the distinction.

In dissenting from a denial of certiorari in Delaware Strong Families v. Penn (2016), Justice Clarence Thomas expressed renewed concerns about the need to shield the anonymity of some donors who might otherwise be targeted for their contributions.

Because the corruption concern surrounding campaign contributions and spending involves undue influence upon candidates by donors and spenders, scholars Bruce Ackerman and Ian Ayers have suggested that all contributions be made anonymously through a governmental clearinghouse. Donors could always claim that they had given funds to a candidate, but the “secret donation booth” system would prevent verification, and thus deny officeholders and donors the ability to enter into corrupt agreements.

Rights of anonymous speech on internet are not absolute

In “The United States of Anonymous: How the First Amendment Shaped Online," author Jeff Kosseff explores two cases, Dentrite International, Inc. v. Doe No. 3, 775 A.2d 756 (N.J. App. Div. 2001) and Cahill v. Doe, 879 A.2d 943 (Del. Super. Ct., June 14, 2005), in which courts recognized relatively strong First Amendment presumptions on behalf of purveyors of anonymous speech, especially for those that are statements of opinions rather than obvious falsehoods, while recognizing that government sometimes has the right to identify such speakers when they have used their platforms to harass, engage in slander or sexual predation, make true threats, or allow foreign governments to influence U.S. elections.

The ascendancy of political communications and fundraising via the internet is raising additional issues of anonymity as it relates to campaign finance disclosure laws.

Many individuals using the internet for political discourse do so under pseudonyms, posting on websites confident that their identity will remain secret. Those seeking to remain anonymous in email can use services, some located offshore, that render their identity impossible to trace. If anonymity can be achieved outside the jurisdiction of the United States, then for internet speakers willing to take additional precautions, it may matter little what federal or state disclosure laws require. It also means that such activity is outside the reach of other laws, such as those that punish libel and defamation, and those protecting intellectual property.

This article was originally published in 2019 and updated in 2022 by First Amendment Encyclopedia staff. Allison Hayward is an elections and ethics attorney in California. She serves on the board of the Office of Congressional Ethics and on the California Fair Political Practices Commission.