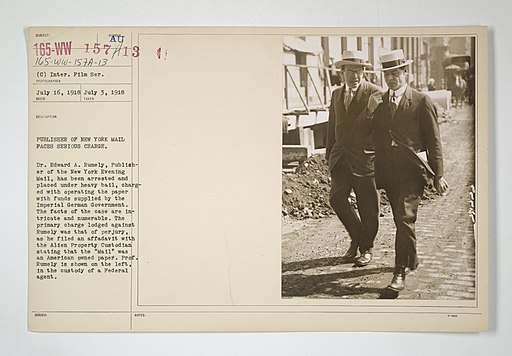 Edward Rumely is shown on the left in this 1918 photo. In the early 1950s, Rumely was convicted of contempt after refusing to disclose to a congressional committee who bought political books for further distribution. His conviction was overturned by a federal appeals court, and the Supreme Court affirmed, saying the congressional committee was limited in its inquiry. Rumely, also publishers of the New York Evening Mail, had experienced other government prosecutions. In this photo, he is in the custody of a federal agent after being arrested on charges that he accepted money from the German government to run his newspaper. After his conviction, he was given a presidential pardon by President Calvin Coolidge. (Photo, public domain via Wikimedia.)

The Supreme Court decision in United States v. Rumely, 345 U.S. 41 (1953), took as its basic premise the First Amendment’s prohibition against congressional abridgment of the rights of free speech and a free press.

The Court unanimously affirmed a federal appeals court decision invalidating a contempt conviction of a witness who had appeared before the House Select Committee on Lobbying Activities.

Edward A. Rumely, who represented an organization known as the Committee for Constitutional Government, had refused to disclose the names of individuals who had made bulk purchases of books of a political nature for further distribution. Rumely was also publisher of the New York Evening Mail.

Justice Felix Frankfurter authored the Court’s decision. Frankfurter did not believe that the committee charge to investigate “all lobbying activities intended to influence, encourage, promote, or retard legislation” was designed to grant the committee the power “to inquire into all efforts of private individuals to influence public opinion through books and periodicals.” He decided that Congress must have intended for the term “lobbying” to have a more restrictive scope.

Justice William O. Douglas wrote a concurring opinion, joined by Hugo Black. Douglas believed that the majority was affirming an interpretation of the law, as it derived from Resolution 298 authorizing the committee investigations, that Congress had explicitly denied. Douglas opined that the Court should simply declare the law to be unconstitutional. Douglas asserted that the First Amendment “expresses the confidence that the safety of society depends on the tolerance of government for hostile as well as friendly criticism, that in a community where men’s minds are free, there must be room for the unorthodox as well as the orthodox views.”