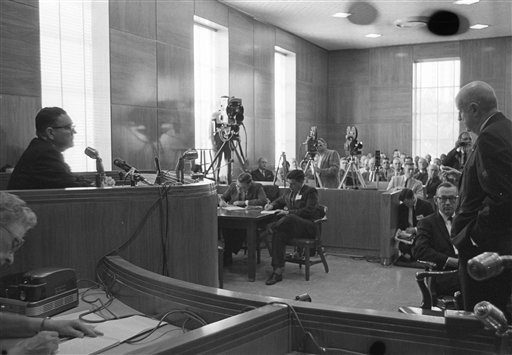 A pre-trial hearing in the court of Judge Otis T. Dunagan (on bench at left) was held in Tyler, Texas in 1962, on a motion by Estes attorney John Cofer (right), to prohibit pictures at the Billie Sol Estes trial. The Court later overturned Estes's conviction due to the the overwhelming presence of cameras in the courtroom. (AP Photo/Ferd Kaufman. Reprinted with permission from The Associated Press.)

In Estes v. Texas, 381 U.S. 532 (1965), the Supreme Court overturned a conviction based on the presence of cameras in the courtroom and explored the relation between First Amendment press freedoms and the Sixth Amendment right to a fair trial.

The case arose from the trial of Billie Sol Estes for swindling. Although live coverage was limited during the trial itself, the opening days of the preliminary hearing had developed into a circus atmosphere as dozens of cameramen staked out the courtroom.

Writing the majority opinion of the Court, Justice Tom C. Clark indicated that this disruption had been enough to deny due process to Estes. Acknowledging the important role that the press could play in “informing the citizenry of public events and occurrences, including court proceedings,” Clark thought that the media at the preliminary hearing had created enough distraction to both the judge and the jury as to interfere with the chief judicial task of ascertaining the truth.

In a concurring opinion, Chief Justice Earl Warren observed that this decision was “not based on generalities or abstract fears,” but on the actual record of disruption in this case.

He believed that excessive publicity turned judicial proceedings into theatrical events. Warren denied that freedom of the press conferred any “special benefit on the press,” explaining that “so long as the television industry, like other communications media, is free to send representatives to trials and to report on those trials to its viewers, there is no abridgment of the freedom of the press. The right of the communications media to comment on court proceedings does not bring with it the right to inject themselves into the fabric of the trial process to alter the purpose of that process.”

In a separate concurrence, Justice John Marshall Harlan II found no “independent right to bring the mechanical facilities of the broadcasting and printing industries into the courtroom” within the First Amendment. He did, however, observe that “the day may come when television will have become so commonplace an affair in the daily life of the average person as to dissipate all reasonable likelihood that its use in courtrooms may disparage the judicial process.”

Four dissenting justices, led by Potter Stewart, argued that the Court should “be wary of imposing any per se rule which, in the light of future technology, might serve to stifle or abridge true First Amendment rights.” Stewart was also deeply concerned by suggestions that “there are limits upon the public’s right to know what goes on in the courts.”

In his dissent, Justice Byron R. White feared that the Court was discouraging “further meaningful study of the use of television at criminal trials.”

The dissent of Justice William J. Brennan Jr. emphasized that Justice Harlan’s concurrence meant that the decision as a whole did not establish “a blanket constitutional prohibition against the televising of state criminal trials.”