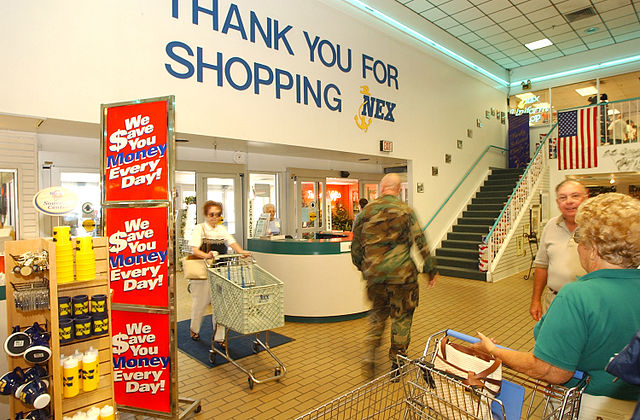 Shoppers shop inside the mall section of the Navy Exchange located at Naval Base Little Creek in Norfolk, Virginia. The sale of sexually explicit material is prohibited at bases and exchanges such as this one due to the Military Honor and Decency Act of 1996. The Second Circuit Court ruled the law was reasonable in 1997. (Public domain.)

In General Media Communications v. Cohen, 131 F.3d 273 (2d Cir. 1997), a divided three-judge panel of the Second Circuit Court of Appeals voted 2-1 to reject a facial First Amendment challenge to the Military Honor and Decency Act of 1996, a federal law prohibiting the sale or rental of sexually explicit material at military bases and exchanges.

General Media, the publisher of Penthouse magazine, had earlier contended in federal district court that the law violated the First Amendment. The government countered that the law was necessary to protect the military’s image of honor, professionalism, and proper decorum.

Federal District Court Judge Shira Scheindlin agreed with the challengers in General Media Communications v. Perry (S.D.N.Y. 1997). She observed, “Society is better served by protecting our cherished right to free speech, even at the cost of tolerating speech that is outrageous, offensive and demeaning.”

The government appealed to the Second Circuit. Writing for the majority, Judge José Cabranes stated that the law was “a reasonable means of promoting the government’s legitimate interest in protecting the military’s image and its core values.”

He reasoned that “Congress has not banned sexually explicit magazines and videos, soldiers and sailors may still buy them elsewhere, receive them by mail, and read or watch them; Congress has decided only that the military itself will not be in the business of selling or renting those items to service members.”

In dissent, Judge Fred Parker wrote, “When First Amendment protection bows to the military’s desire to suppress certain ideas without a clear and strong reason, desire to protect our liberties with a strong military authority may end up eroding our liberty to speak freely and to be tolerated in doing so.”

General Media appealed to the Supreme Court, which denied review in June 1998 in General Media Communications v. Perry. In 2002 the Ninth Circuit Court of Appeals rejected another First Amendment challenge to the Military Honor and Decency Act in PMG International Division v. Rumsfeld.