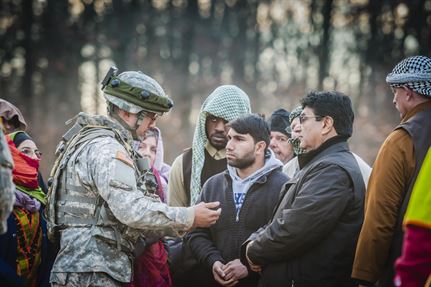 Civilians take part in a training exercise at Joint Base McGuire-Dix-Lakehurst, New Jersey, in 2016. A Fort Dix regulation prohibiting civilians to engage in political forums on the base was upheld by the Supreme Court in Greer v. Spock (1976). (U.S. Army photo by Sgt. Michael T. Crawford, public domain.)

In Greer v. Spock, 424 U.S. 828 (1976), the Supreme Court decided that, despite First Amendment protections, areas on military bases generally open to the public were not necessarily open to civilians seeking to distribute political literature or engage in political forums.

Fort Dix did not permit civilian speeches and demonstrations

In the years before the ruling, the federal government had exercised complete authority over the Fort Dix military base in addition to the county and state roads that ran through it. With some minor exceptions, civilians were permitted freely to tour the unrestricted portions of the base, but speeches and demonstrations of a politically oriented nature were not permitted under regulations strongly enforced by base authorities. Fort Dix Regulation 210-26, adopted by the base in 1968, provided that “demonstrations . . . and similar activities are prohibited and will not be conducted on the Fort Dix Military Reservation.” Regulation 210-27 (1970) stated that the “distribution or posting of any publication . . . prepared by any person . . . or agency . . . is prohibited on the Fort Dix Military Reservation without prior written approval of the Adjutant General.”

The respondents sued, claiming that the regulations were in conflict with First Amendment protections for open speech in a public forum. The case, initially argued as Spock v. David, was appealed to the Supreme Court as Greer v. Spock, as the replacement for the retired base commander appealed the lower court’s decision upholding Spock’s claim.

Court held that rule was constitutional

The Court held that allowing civilians on a federally owned property, particularly a military base, did not automatically provide a sphere of activity for anyone wishing to open a political forum. The Court further noted that soldiers were wholly free to attend and engage in political activities as off-duty citizens but that the military was insulated from the partisan nature of politics in general. This, as the Court rationalized, was consistent with the tradition of a neutral military establishment implied by the Constitution.

The Court also overturned the lower court’s reliance on Flower v. United States (1972) and the perception that this precedent allowed for the broad interpretation that all federally owned properties open to the public are subject to political activity. This case fits within traditional Supreme Court opinions that have usually upheld military regulations when they conflict with individual expression.

This article was originally published in 2009. Walter Huber is a Professor and Chair of the Department of Political Science and Criminal Justice at Muskingum University. He serves as the Director of the University's Center for Regional Planning and Development.