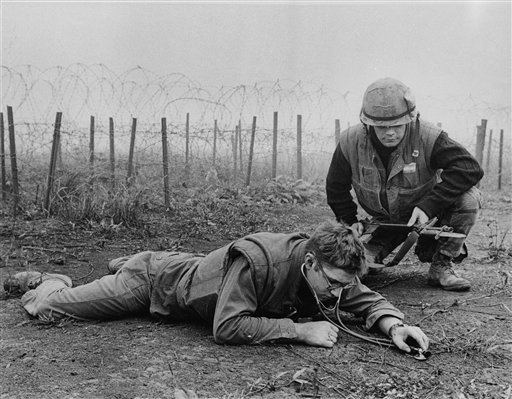 The Supreme Court upheld the conviction of a former serviceman who had mimeographed statements questioning the U.S. involvement in Vietnam, after saying the military law under which he was convicted had already withstood a First Amendment challenge. In this photo of the Vietnam War, Theodore Rutkowski, a U.S. Navy hospital corpsman from Pennsylvania, uses his stethoscope to listen for digging by North Vietnamese troops underneath a U.S. Marine outpost in 1968. (AP Photo/Olson, used with permission from the Associated Press)

The Supreme Court in Secretary of the Navy v. Avrech, 418 U.S. 676 (1974), reinstated the conviction of a former serviceman for distribution of statements designed to promote disloyalty among fellow soldiers.

Mark Avrech, who had sought to mimeograph a statement questioning U.S. involvement in Vietnam, was convicted in a court martial for violating Article 134 of the Uniform Code of Military Justice, which called for punishing “all disorders and neglects to the prejudice of good order and discipline in the armed forces” and “all conduct of a nature to bring discredit upon the armed forces.”

The District of Columbia Circuit Court of Appeals had found the law under which Avrech was convicted to be “unconstitutionally vague and overbroad.”

The Supreme Court remanded the case and directed counsel to examine issues relative to jurisdiction and exhaustion of remedies. In the meantime, the Court had reached a decision in Parker v. Levy (1974) holding that the law at issue in both cases was not unconstitutional.

The Court’s per curiam opinion in Avrech stated that attorneys would not have sufficient rationale to pursue the jurisdictional issue knowing that they would still lose on the substantive question. It accordingly reversed the circuit court and left resolution of jurisdictional issues until later.

Although Justice Potter Stewart had dissented in Parker, he agreed that it controlled Avrech.

In a dissenting opinion, Justice William O. Douglas chose to address the First Amendment issues. Drawing from his own experience in World War I, Douglas argued that there was a major difference between merely expressing ideas and plotting against superior officers.

He wrote, “Secrecy and suppression of views which the Court today sanctions increases rather than repels the dangers of the world in which we live.”

In a separate dissent, Justice Thurgood Marshall argued that although the ruling in Parker may have upheld the law against general charges of vagueness, the Court should consider the application of the law to the specific case.