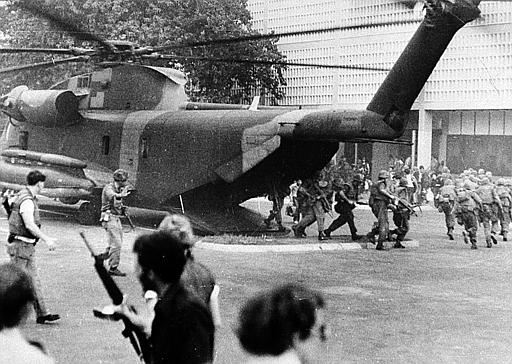 In 1974, Marines serving at a base in Japan were charged with circulating petitions contrary to U.S. military regulations that required prior approval from their commanders. The Supreme Court upheld the regulations. In this 1975 photo, U.S. Marines debark as evacuees load the CH-53 helicopter at the U.S. Embassy in Saigon, Vietnam. The Marines were initiating the final stage of evacuation by air after a communist victory in the Vietnam War. (AP Photo/Frances Starner, used with permission from the Associated Press)

In Secretary of the Navy v. Huff, 444 U.S. 453 (1980), the Supreme Court upheld a regulation requiring members of the armed services to obtain a commander’s approval before circulating petitions or leaflets.

The case reached the Court at the same time as Brown v. Glines, which became the controlling case.

Frank Huff, Robert Falatine, and Robert Gabrielson were serving in the Marine Corps at the United States Marine Corps Air Station in Iwakuni, Japan. In 1974, they sought permission to circulate a petition addressed to members of Congress that dealt with "the use of military forces in labor disputes within the United States, amnesty for men who resisted the draft or deserted the Armed Forces during the Vietnam War, and United States support for the Government of south Korea," according to the ruling. The commander denied two requests, but allowed the petition about South Korea to circulate within the base.

Huff and Falatine had also sought to distribute off base a pamphlet containing the Declaration of Independence and the First Amendment and criticizing military commanders who had restricted petitioning.

Men were charged under military code of not getting prior approval

After they distributed information, they were charged with circulating a petition contrary to U.S. Navy and Marine Corps regulations that required prior approval from their commander.

Huff and Falatine claimed protection under section 10 of the U.S. Code at 1034, which provided that “[no] person may restrict any member of an armed force in communicating with a member of Congress, unless the communication is unlawful or violates a regulation necessary to the security of the United States.”

In a per curiam opinion, the Court overturned the District of Columbia Circuit Court of Appeals’ ruling that had invalidated the regulation requiring command approval.

Relying chiefly on Brown v. Glines, the Court reasoned that federal statutes were designed to allow individuals to express their views to members of Congress but did not authorize “the unrestricted circulation of petitions within a military base.”

On such matters, commanders needed to be given sufficient authority “to preserve morale and good order among his troops.”