By Roy B. Flemming
Related cases in Movies, Video Games, and Comics, Obscenity and Pornography 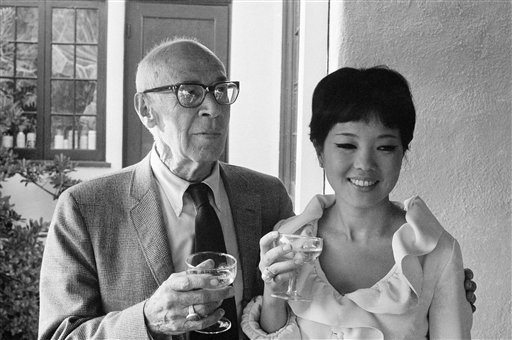 Henry Miller and his wife after their marriage in 1967. Miller wrote The Tropic of Cancer, one of the most censored books in history. In Grove Press v. Gerstein (1964), the Supreme Court said that that book was not obscene becasue it had some redeeming social value. (AP Photo/Harold Filan, used with permission from the Associated Press.)

In Grove Press v. Gerstein, 378 U.S. 577 (1964), the Supreme Court rejected a Dade County, Florida, ban of Henry Miller’s Tropic of Cancer, one of the most censored books in history. The Court handed down Grove Press in a single-paragraph per curiam opinion decided in tandem with Jacobellis v. Ohio (1964), having decided both by a 5-4 vote and by the same reasoning.

Grove Press, founded in 1949 and specializing in sexually explicit and politically controversial books, had offered to publish Tropic of Cancer despite the ban and to pay all legal expenses. The book, released in 1961, became a bestseller and was quickly a target of state and local censors. By the time the Supreme Court decided Grove Press, the book had been involved in nearly 100 court cases.

Grove Press argued a proposition before the Court first advanced by Harry Kalven Jr. of the University of Chicago Law School. Kalven offered that the ambiguities of the obscenity test in Roth v. United States (1957) could be invalidated if the Supreme Court were to establish as obscene only those sexually explicit communications “utterly without redeeming social value.” This phrase made its way into Justice William J. Brennan Jr.’s Jacobellis opinion, which the attorney for Grove Press, Edward De Grazia, heralded as “revolutionary doctrine.” The narrow majority willing to accept the case (four justices would have denied certiorari) believed that The Tropic of Cancer did have literary merits that separated it from other materials that had been deemed to be obscene.