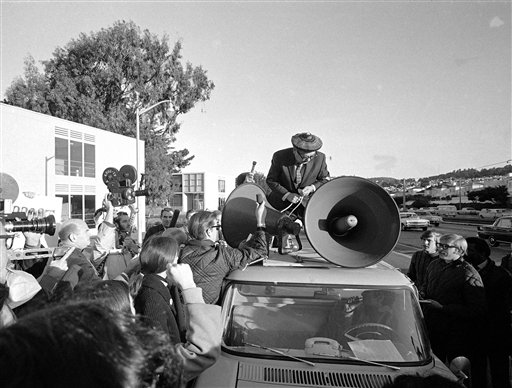 The 5-4 Supreme Court decision in Kovacs v. Cooper, 336 U.S. 77 (1949) upheld the conviction of a man under a Trenton, New Jersey, ordinance that prohibited the use of sound trucks that emitted “loud and raucous” noises on city streets. In this photo, Dr. S.I. Hayakawa, acting president of San Francisco State College, yanks wires from loudspeakers atop a sound truck on the campus Dec. 2, 1968. (AP Photo, used with permission from the Associated Press)

The 5-4 Supreme Court decision in Kovacs v. Cooper, 336 U.S. 77 (1949) upheld the conviction of a man under a Trenton, New Jersey, ordinance that prohibited the use of sound trucks that emitted “loud and raucous” noises on city streets.

Scholars often cite the case to demonstrate that the First Amendment does not give absolute protection to speech. The government can impose reasonable time, place, and manner restrictions on expression, particularly when the government is not restricting speech based on its content or viewpoint.

Court believed the ordinance was not too vague

Justice Stanley F. Reed authored a decision, joined by Chief Justice Frederick M. Vinson and Justice Harold H. Burton, upholding inclusion in the ordinance of the phrase “loud and raucous” against charges that it was too vague. Reed believed the ordinance was reasonably applied to “vehicles with sound amplifiers emitting loud and raucous noises.”

Although city streets are “a normal place for the exchange of ideas by speech or paper, they are not “beyond control.” And although freedom of speech occupies a “preferred position,” it “does not require legislators to be insensitive to claims by citizens to comfort and convenience.” The ordinance allows for discussion by means of “the human voice, by newspapers, by pamphlets, [and] by dodgers.”

Justice Felix Frankfurter’s concurring opinion professed that the majority decision was closer to his dissent in Saia v. New York (1948) — it had denied a police chief the authority to decide whether to grant permits to sound trucks in public parks — than to the majority opinion in that case, but he devoted most of his opinion to refuting the idea that freedom of speech deserved a “preferred position.” Frankfurter found that the phrase had become “a deceptive formula” that led to “mechanical jurisprudence.” Indeed, it was a perversion of Justice Oliver Wendell Holmes Jr.’s reasoning in free speech cases. So long as legislators did not “prescribe what ideas may be noisily expressed” or “discriminate” among them, they were free to make judgments about the legitimacy of sound trucks.

Dissenters thought the laws needed to be more carefully drawn

Justice Hugo L. Black, joined by Justices William O. Douglas and Wiley B. Rutledge, dissented. Black objected that the record contained no evidence that the noise produced by the sound truck had actually been “loud and raucous.” He believed the case permitted evils similar to the one that Saia had invalidated. The ordinance unfairly tipped the scales against individuals for whom sound trucks were a cheap alternative to the use of more established and expensive media. Laws limiting the use of amplifiers on city streets had to be more carefully drawn.

In a separate dissent, Rutledge also focused on the ambiguity of the statute and argued that Frankfurter had proved, rather than disproved, that First Amendment freedoms occupied a “preferred position.”