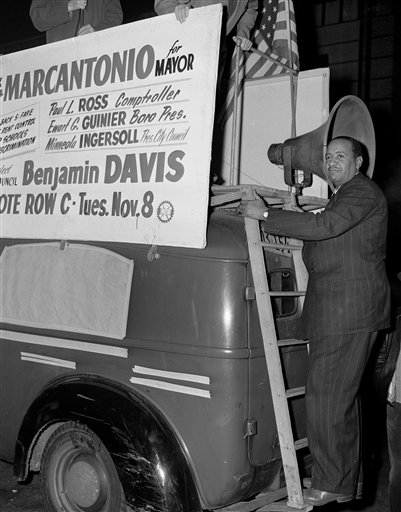 The Supreme Court in 1948 invalidated a New York town's ordinance that required police permits to use sound trucks and allowed the chief too much discretion on who got the permits. Sounds trucks have been used to play messages at high volumes while driving or parked, such as in this 1949 photo from the same period. In this photo, Benjamin J. Davis Jr., city councilman seeking re-election, climbs a ladder to reach the top of a sound truck for an election speech in New York. (AP Photo/Matty Zimmerman, used with permission from the Associated Press)

The Supreme Court decision in Saia v. New York, 334 U.S. 558 (1948), limited the discretion that a public official could exercise in regulating sound trucks on public property.

Saia v. New York is important because it places limits on government officials’ regulations on speech even when the government appears to be furthering an ostensibly legitimate purpose.

The chief of police of Lockport, New York, vested by ordinance with the power to issue licenses, had denied Saia, a Jehovah’s Witness, renewal of a permit to use sound amplification devices at a public park, after park patrons complained about their use on earlier occasions.

Justice William O. Douglas wrote an opinion for five members of the Court. He argued that the regulation at issue imposed “a previous restraint on the right of free speech.” The statute was not “narrowly drawn” so as to prescribe appropriate standards limited to hours, places of use, or volume.

Police chief has role of censor

The ordinance vested the chief with “uncontrolled discretion,” whereas freedom of speech should be given the same “preferred treatment” that the Court had given to freedom of religion, of the press, and of speech and assembly in other cases. By vesting the chief with the power to stop sounds that were annoying, it also granted him power to stop annoying ideas. It elevated him to the role of a censor.

Frankfurter saw no evidence that the police chief had acted arbitrarily.

In a separate dissent, Justice Robert H. Jackson argued that if a city could, as the majority had indicated, control the level of decibels, it could prescribe them altogether. Citing McCollum v. Board of Education (1948), Jackson further denied that the fact that Saia was engaged in religious teaching gave him the right to appropriate public property for this use. Jackson believed that the Court was improperly acting like “a council of revision” by intruding into decisions that should be left to local communities.

In Kovacs v. Cooper (1949) the Supreme Court reiterated the right of towns to make reasonable time, place, and manner restrictions in regard to sound trucks in public streets.