By Elizabeth R. Purdy
Related cases in Obscenity and Pornography 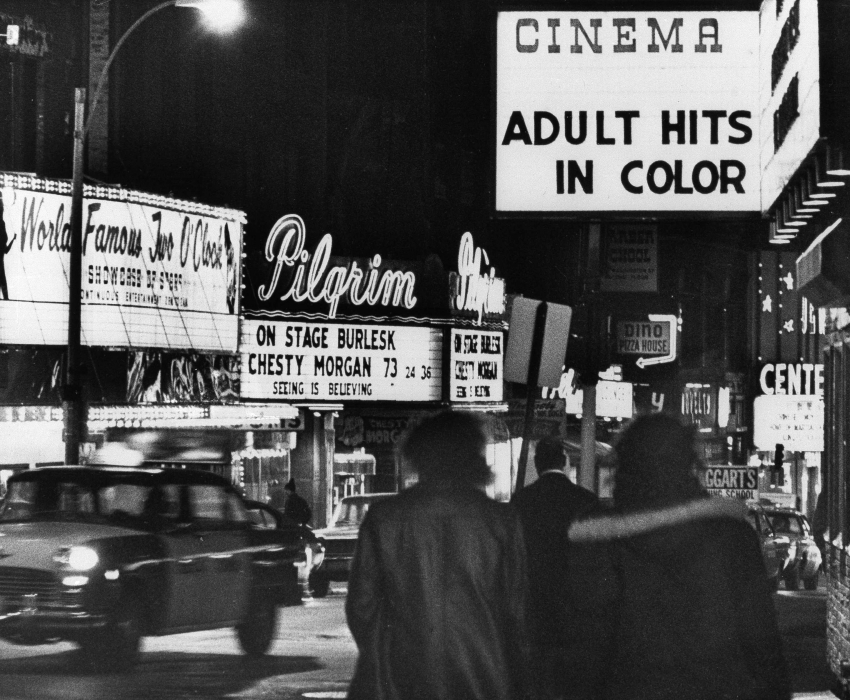 The seizure of pornographic movies and books at several adult bookstores and movie theaters were at issue in Alexander v. United States. The Supreme Court rejected the owner's claim that his First Amendment rights had been violated and the seizures constituted prior restraint on free speech. (This photo shows adult theaters in Boston on June 7, 1974 in an area of town that the city had designated as an adult entertainment district in hopes this will keep the sex business from spreading to other parts of the city. AP Photo/J. Walter Green)

In Alexander v. United States, 509 U.S. 544 (1993), a two-part split decision, the Supreme Court rejected the claims of a petitioner convicted under obscenity and racketeering laws that his First Amendment free expression rights had been violated.

In response to petitioner’s claims that his Eighth Amendment rights had been violated through the levying of “excessive” fines, the Court remanded the case for further elaboration by lower courts, leaving them to decide what constitutes “excessive” fines.

In Austin v. United States, handed down the same day as Alexander, Justice Harry A. Blackmun authored the Court’s unanimous opinion that the Constitution required that the extent of property seized by governments be proportionately related to the gravity of the crime in question.

Books and property seized after obscenity, racketeering conviction of Alexander

Alexander concerned the owner of several adult bookstores and movie theaters offering pornography and sexual paraphernalia for sale throughout Minnesota. Ferris J. Alexander Sr. was convicted on three counts of violating state obscenity laws and on 12 counts of violating the Racketeer Influenced and Corrupt Organizations Act (RICO) of 1970.

Following these convictions, several thousand books and movies were destroyed, and authorities seized all of Alexander’s bookstores and theaters. His forfeited assets were estimated at $9 million. Alexander was also given a six-year prison term and ordered to pay a fine of $100,000 in addition to court costs.

Alexander appealed the forfeitures, arguing that the elements of RICO dealing with forfeiture involved prior restraint on his First Amendment right to free speech and insisting that the relevant RICO provisions were overbroad.

RICO had been designed to put an end to racketeering, which Congress defined as acts and threats involving murder, kidnapping, gambling, arson, robbery, bribery, extortion, the sale of obscene matter, or dealing in a controlled substance or listed chemical. Potential punishment for violating RICO included prison terms from 20 years to life and forfeiture of all money and property garnered from the racketeering activity. In the late 1970s, prosecutors around the country began using RICO to fight organized crime.

For the minority, Justice Anthony M. Kennedy was joined by Justices Harry A. Blackmun and John Paul Stevens, with Justice Souter deserting the majority to join the Kennedy dissent on the Eighth Amendment issue in Part II.

Court said there was no prior restraint

Voting 5-4 in Part I of Alexander, the Court addressed the First Amendment issues by reaffirming the obscenity standards established in Roth v. United States (1957), which emphasized “the average person” applying “contemporary community standards,” and rejecting the notion of prior restraint. In justifying the latter, the Court referred to the explanation handed down in Near v. Minnesota (1931) that prior restraint occurs only when communications are banned before they occur. It therefore had no relevance in Alexander.

According to the Court, the RICO-mandated forfeiture of Alexander’s property was acceptable because his assets had been generated through decades of racketeering activities. The Court rejected the idea that extenuating circumstances had rendered the forfeiture of Alexander’s property illegal, citing Marcus v. Search Warrant (1961) and Fort Wayne Books, Inc. v. Indiana (1989) as examples of cases in which rights had indeed been violated.

In Part II of Alexander, dealing with the levying of “excessive fines” under RICO, the justices remanded the case to the Eighth Circuit, which had opted not to offer an opinion on what constituted “excessive.”

Instead, the appellate court had limited itself to declaring that Alexander had not been the victim of “cruel and unusual punishment,” which was also prohibited under the Eighth Amendment. The Supreme Court contended, however, that lower courts were better suited to deciding whether specific fines were “excessive.” Although Chief Justice Rehnquist offered a hint that there might be some validity in arguing that forfeiture, a prison term, and large fines might be excessive, he qualified the statement by reaffirming that the enormity of Alexander’s racketeering activities must be taken into account when defining “excessive” as related to his case.

Critics of racketeering law complain it is unconstitutional

Since the early 1980s, RICO has been used to target individuals involved in organized crime as well as politicians, racists, abortion protesters, animal rights activists, and others accused of illegal activity.

Individuals convicted under RICO have repeatedly attempted to undermine the statute by having all or parts of it declared unconstitutional.

In United States v. Turkette (1981), the Court stood by RICO, holding that Congress had designed the law to keep organized crime from infiltrating legitimate businesses. Four years later, in Sedima S.R.R.L. v. Imrex Company, the Court broadened RICO’s scope by asserting that it was not necessary to relate specific injuries to racketeering activities to win damages in civil cases prosecuted under RICO.

Nevertheless, limitations on RICO’s scope were handed down in Agency Holding Corporation v. Malley Duff and Associates (1987) and Reves v. Ernst and Young (1990).

Among the more controversial uses of RICO is the prosecution of persons who commit violence at abortion clinics.

As in Alexander, the First Amendment and RICO were at issue in Scheidler v. National Organization for Women (2006). Protesters outside abortion clinics had long insisted that it was their First Amendment right to picket clinics and hand out literature, but when protests became violent and eventually led to murder, the Court responded with the 8–1 decision that no First Amendment freedoms were violated when prosecutors used RICO to triple prison terms and fines for violent protesters.