Corporation of the Presiding Bishop of the Church of Jesus Christ of Latter-day Saints v. Amos (1987) 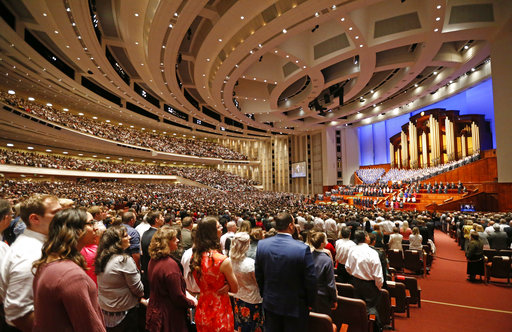 In a case involving the Mormon church, the Supreme Court established that religious organizations have rights and religious bodies can discriminate in employment decisions based on religion whereas secular organizations cannot. In this photo, people attend the twice-annual conference of The Church of Jesus Christ of Latter-day Saints Saturday, March 31, 2018, in Salt Lake City. (AP Photo/Rick Bowmer, with permission from The Associated Press.)

In Corporation of the Presiding Bishop of the Church of Jesus Christ of Latter-day Saints v. Amos (1987), the Supreme Court affirmed an exemption from anti-discrimination provisions of the Civil Rights Act of 1964 for the nonprofit activities of religious organizations, not just their religious ones.

Title VII of the Civil Rights Act of 1964 prohibits employers from discriminating on the basis of age, race, sex, disability, religion, national origin, and pregnancy.

The creators of this act were concerned, however, that it would infringe on the First Amendment rights of religious organizations by forcing them to hire individuals who were not in accord with their beliefs. The measure did not specifically address the religious practices of religious employers or the right of religious institutions to employ people based on religious considerations. Because of these concerns, lawmakers added an exemption, section 702, specifically acknowledging the right to use religious criteria in employment decisions.

The Equal Employment Opportunity Act of 1972 altered section 702 to cover all secular as well as religious nonprofit activities of a religious organization.

The case as heard by the Supreme Court combined discrimination cases that had been filed in Utah district court by Christine J. Amos and seven other plaintiffs who worked at organizations run by the Church of Jesus Christ of Latter-day Saints (the Mormons).

Arthur Frank Mayson was added as another plaintiff. Mayson had been employed at the Deseret Gymnasium — a nonprofit facility in Salt Lake City open to the public but run by the Church of Jesus Christ of Latter-day Saints — but was discharged in 1981 for failing to qualify for a temple recommend.

Mayson and the other plaintiffs claimed that they were wrongfully terminated for their religious beliefs and claimed that the exemption afforded to the church by section 702 violated the establishment clause of the First Amendment. A unanimous Supreme Court disagreed.

Court was concerned about government entanglement with religion

In the opinion for the Court, Justice Byron R. White examined section 702 by applying the three-part Lemon test and deciding:

Some of the main concerns with this case involved the possibility of the government becoming involved in the internal affairs of a religious organization if it had to determine what activities were religious.

In a concurring opinion, Justice William J. Brennan Jr. observed that this would constitute an improper government intrusion into religion, which the establishment clause forbids. He further expressed the concern that if religions had to rely on courts to determine what activities are religious, then they would base their activities in accordance to how likely they could be sued, an unacceptable violation of the free exercise clause.

The ruling did not resolve whether the exemption in section 702 can be applied to a religious organization’s for-profit activities.