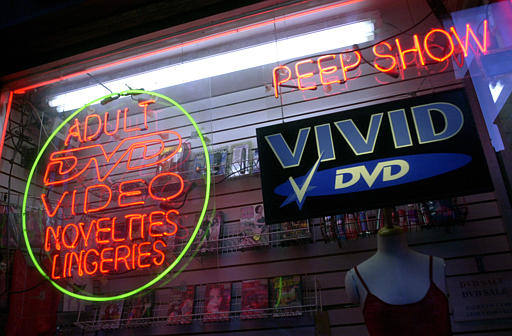 The Supreme Court found that the seizure of numerous films, magazines and reels at an adult business in New York violated the First Amendment freedoms of speech and press and the Fourth Amendment's protection from unreasonable searches. The decision overturned the obscenity conviction of the business's owner. This photo is of a sex shop store window in midtown Manhattan in 2005 (AP Photo/Mark Lennihan, used with permission from the Associated Press)

In Lo-Ji Sales, Inc. v. New York, 442 U.S. 319 (1979), the Supreme Court reversed the obscenity convictions of a New York business, finding that the search and seizure of the adult business violated the First Amendment freedoms of speech and press and the Fourth Amendment protections for search warrants and resembled the infamous general warrant/writs of assistance of the eighteenth century.

The case began after a New York State Police investigator purchased two films from an adult bookstore. He then took the films to a town justice, who issued a warrant authorizing a search of the business.

The search — which was conducted by the town justice and numerous other authorities — turned into a roving expedition that resulted in the seizure of 23 films, 397 magazines, and 431 reels and the virtual shutdown of the business for an entire day.

The business unsuccessfully sought to suppress the warrant on First and Fourth Amendment grounds.

Court said that the search and seizure violated First Amendment

The business pursued its constitutional claim on appeal that the warrant was not conducted in a constitutional manner. The state argued that it acted in compliance with Heller v. New York (1973). In Heller, the Court had approved the seizure of a single film before an adversary hearing on obscenity. Writing for a unanimous Court, Chief Justice Warren E. Burger distinguished that case from Lo-Ji, writing that “Heller does not permit the kind of activities revealed by this record.”

Burger concluded that society could better “tolerate the admittedly pornographic business of petitioner than return to the general warrant era. . . .”