By Susan Gluck Mezey
Related cases in Obscenity and Pornography 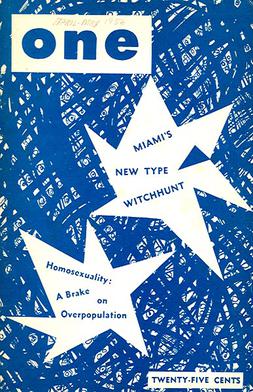 In One, Inc. v. Olesen, 241 F.2d 772 (9th Cir. 1957), the Ninth Circuit Court of Appeals ruled that a magazine published for a homosexual audience was obscene and was therefore not constitutionally protected under the First Amendment rights of free speech and press. (Image via Wikimedia Commons, fair use)

In One, Inc. v. Olesen, 241 F.2d 772 (9th Cir. 1957), the Ninth Circuit Court of Appeals ruled that a magazine published for a homosexual audience was obscene and was therefore not constitutionally protected under the First Amendment rights of free speech and press.

Publisher of homosexual magazine sued government for seizing the magazine

The case arose when the postmaster of the city of Los Angeles, Otto K. Olesen, ordered federal postal authorities to seize One: The Homosexual Magazine, informing the publisher that he considered it “obscene, lewd, lascivious and filthy” and “non-mailable” under federal law (the Comstock laws). The publisher sued, arguing that the government’s actions violated the First and the Fourteenth Amendments.

Lower court ruled in favor of the government

In deciding whether the postmaster’s actions were justified, the lower court had to determine whether the October 1954 issue of the magazine was obscene. In 1957 the Supreme Court held in Roth v. United States that obscenity was not protected by the First Amendment and that publishers and distributors of obscene material could be punished under state or federal law. In most cases, the courts had to decide if the book or magazine in question fell within the Court’s definition of obscenity.

In this case, the lower court ruled in favor of the government, finding the magazine obscene because it contained stories and poems that were intended to arouse a gay audience and also provided information on how to obtain obscene material (another criterion of “non-mailability”).

On appeal, the Ninth Circuit Court of Appeals emphasized that it would base its ruling on the effect of the words on the reader, insisting that it was not “its brothers’ keeper as to the type of reading to be indulged in.” However, in announcing the opinion for the circuit court, Judge John Rolly Ross noted that although the magazine stated its aim was to provide educational and informative material, it “has a primary purpose of exciting lust, lewd and lascivious thoughts and sensual desires in the minds of the persons reading it.”

The judge described one of the articles, entitled “Sappho Remembered,” about a 21-year-old woman’s choice to live as a lesbian as “cheap pornography.” The judge said that he believed homosexuality could only be discussed from a “scientific, historical and critical point of view.” Thus, because of such “morally depraving and debasing” articles, the court found the magazine as a whole “obscene and filthy” and upheld the lower court’s ruling that the postmaster was justified in considering it “non-mailable.”

The next year, in One, Inc. v. Olesen (1958), the Supreme Court reversed the circuit court opinion, merely citing its ruling in Roth as the reason for its decision.