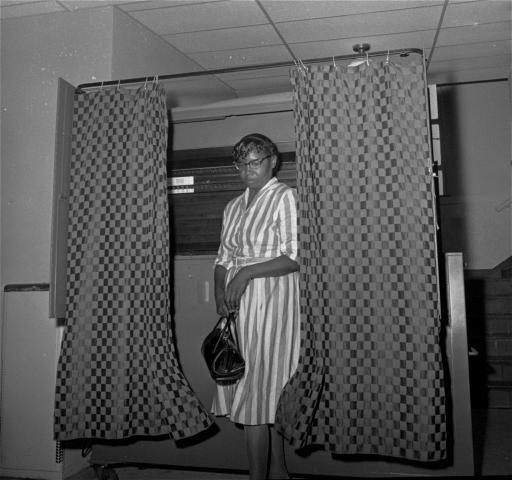 The Southern Conference Education Fund was a civil rights advocacy group that promoted desegregation and African-American voting rights. The group would have assisted voters like Mary E. Johnson, pictured here in 1962, the first African-American to vote in East Carroll Parish, Louisiana since 1922. In Dombrowski v. Pfister (1965), the Supreme Court overturned a Louisiana law that had declared the Southern Conference Education Fund a communist-front organization. (AP Photo/Jim Bourdier, used with permission from the Associated Press)

In Dombrowski v. Pfister, 380 U.S. 479 (1965), the Supreme Court decided that a court may enjoin enforcement of a statute that is so overbroad in its prohibition of unprotected speech that it substantially prohibits protected speech — especially if the statute is being enforced in bad faith.

Dombrowski's organization was declared a communist front under Louisiana law

James A. Dombrowski was executive director of the Southern Conference Education Fund (SCEF), a civil rights advocacy group that promoted desegregation and African-American voting rights. State officials in Louisiana declared the SCEF a subversive or communist-front organization whose members were violating the Louisiana Subversive Activities and Communist Front Control Law.

Louisiana officials seized and searched Dombrowski’s and two lawyers’ papers and indicted them.

Dombrowski and the others sued in federal court to have the statute declared unconstitutional and enjoin its enforcement. Two of the three judges on the 5th U.S. Circuit Court of Appeals panel declined to do so, opining that federal courts should abstain from intruding into state litigation before it has been reviewed by the state’s highest court.

Justice William J. Brennan Jr. wrote the opinion for the five-justice majority. The Court held that although federal courts ordinarily should abstain from interfering in state litigation, even when constitutional issues are involved, they may intrude when a statute substantially chills free expression through overbroad application and when parties challenge a statute facially.

Moreover, when a statute is substantially overbroad, persons may challenge the entire statute and not just those aspects that apply to them. The Court found the Louisiana statutes to be void on their face and ordered the district court to grant the requested relief.

Two justices did not participate in this case. Justice John Marshall Harlan II, joined by Tom C. Clark, dissented because he thought that abstention is appropriate even when federal rights are involved as states are also bound by the Constitution.