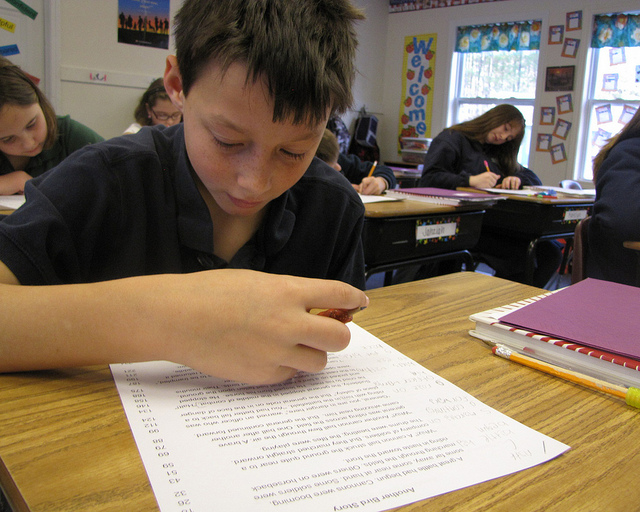 In a 5-4 decision, the Supreme Court in 1980 upheld a New York law that allocated funds to private schools, including religious schools, to pay for state-mandated tests. (Photo via flickr by Brad Barth, showing a charter school student taking an end-of-course exam, CC BY 2.0.)

In Committee for Public Education and Religious Liberty v. Regan, 444 U.S. 646 (1980), the Supreme Court ruled that a New York statute allocating funds to reimburse religious as well as secular private schools for testing and other services mandated by state law did not violate the establishment clause of the First Amendment.

In a 5-4 vote, the court found the measure to have a secular legislative purpose and maintained that consistent with its decisions in Lemon v. Kurtzman (1971), Earley v. DiCenso and Robinson v. DiCenso (1971), and Wolman v. Walter (1977), the primary purpose of the legislation neither advanced nor prohibited religion and did not promote excessive entanglement between government and religion. The case has since been used as precedent.

In the opinion for the Court, Justice Byron R. White argued that the law had the clear secular purpose of preparing students for the “challenges of American life.” He also pointed out that the state of New York had audits in place to make sure that the funding went only toward its intended purpose, distinguishing Regan from a New York statute struck down in Levitt v. Committee for Public Education and Religious Liberty (1973).

In a dissenting opinion, Justice Harry A. Blackmun wrote that the facts of the case did not satisfy all elements of the three-part Lemon test and disagreed with the majority’s assessment that the statute did not promote excessive entanglement.

In a dissent joined by Justice William J. Brennan and Justice Thurgood Marshall, Justice John Paul Stevens stated that the majority’s findings were yet another ad hoc decision in how the court handled what can and cannot be paid for by the state.

Regan demonstrates the Court’s approach in evaluating each case individually in relation to the establishment clause, rather than relying on a one-size-fits-all litmus test.