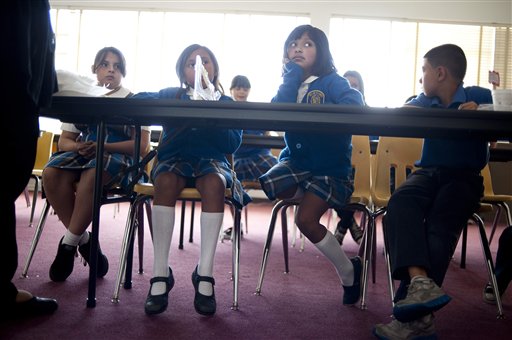 After the Supreme Court ruled that government payments to parochial schools were unconstitutional, the Court upheld retroactive payments from before the ruling in Lemon v. Kurtzman (1973). The payments to the parochial schools, mostly Catholic schools, were originally designed to help shore up the schools that were facing budget problems, a problem that has continued decades later. This photo from 2012 is of young students at Our Lady of Lourdes in Los Angeles, a Catholic private school that almost closed because of dropping enrollment. (AP Photo/Grant Hindsley, used with permission from the Associated Press)

The Lemon II ruling allowed Pennsylvania to reimburse religion-affiliated schools for costs and services accrued prior to such payments being invalidated in Lemon I as a violation of the First Amendment’s establishment clause.

In the 1971 case, the Court developed the Lemon test to overturn state laws aiding parochial schools. Specifically, the Court found that the laws had the impermissible effect of creating “excessive entanglement” between church and state.

Lemon decision was not retroactive in banning payments, Court said

On remand, the district court enjoined any payments made under the reimbursement program but allowed Pennsylvania to reimburse the schools for services rendered before the Lemon I decision. Appellants challenged the ruling, but the Supreme Court affirmed.

Lemon II modified the impact of the first case by denying that it needed to be retroactively applied to payments a state had already promised to parochial schools for mandated services.

Chief Justice Warren E. Burger’s opinion for the majority observed the difficulty of reconciling new rules “with reliance interests founded upon the old.” He further stressed the broad discretion that the Supreme Court generally extended to lower courts in such circumstances. In this case, payment of funds for past programs would require a minimal audit that did not present the “risk of significant intrusive administrative entanglement, since only a final post-audit remains and detailed state surveillance of the schools is a thing of the past.”

Moreover, it enabled the state to make up for “the expenses incurred by the schools in reliance on the state statute.” Burger observed that the appellants in the case had not initially questioned past payments but only made the claim after their success in Lemon I. In a federal system, institutions could not expect to cease dealings with, or reliance on, states until federal courts approved their laws.

Dissenters said ban should be complete

Justice William O. Douglas wrote a dissent, which Justices William J. Brennan Jr. and Potter Stewart joined. Citing James Madison’s Memorial and Remonstrance, Brennan said that the ban on state monies going to parochial schools should be complete, and he saw nothing in past precedents that should have given states any confidence that such payments would be upheld.

New York v. Cathedral Academy (1977) refused to extend this decision beyond the date of Lemon I.