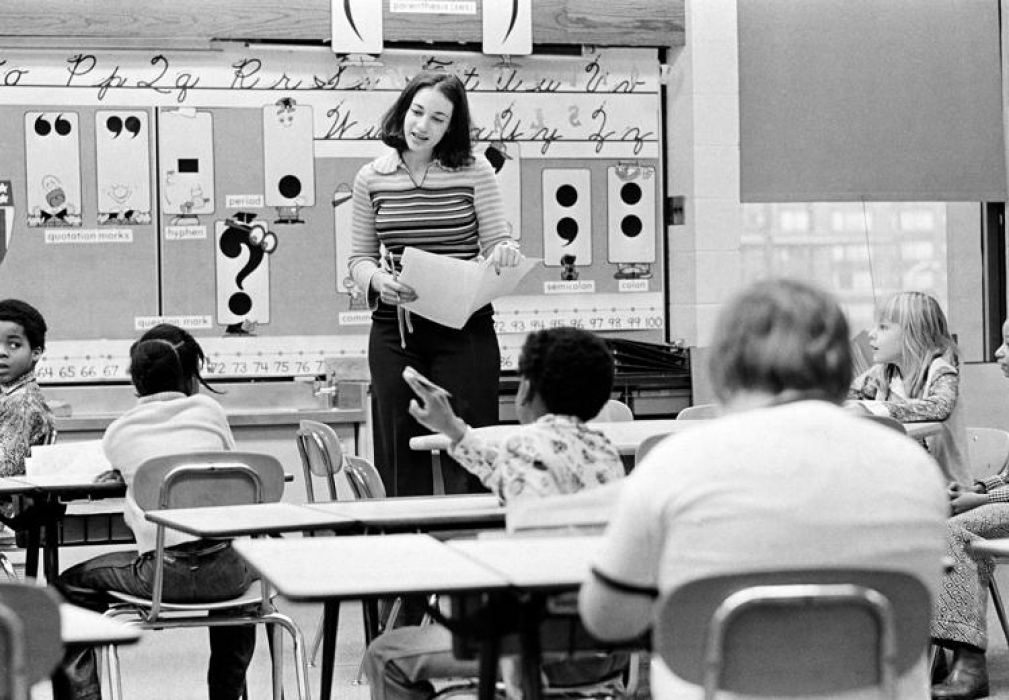 The Supreme Court decision in Meek v. Pittenger, 421 U.S. 349 (1975) concerns an establishment clause challenge to Pennsylvania statutes that permitted its public schools to lend resources and services to both nonpublic school students and the academic institutions that they attend (including religious ones). In this photo, third-grade teacher Judy Hallman calls out attendance at Martin Luther King Elementary School in Pittsburgh, Pa., on Jan. 27, 1976. (AP Photo, used with permission from the Associated Press)

The Supreme Court decision in Meek v. Pittenger, 421 U.S. 349 (1975) concerns an establishment clause challenge to Pennsylvania statutes that permitted its public schools to lend resources and services to both nonpublic school students and the academic institutions that they attend (including religious ones).

A panel of three federal judges in the district court upheld both statutes. The plaintiffs then appealed to the U.S. Supreme Court, which reversed in part and affirmed in part.

In the plurality opinion, written by Justice Potter Stewart and joined by two other justices, the Court upheld the textbook loan provision because it was constitutionally indistinguishable from a similar NewYork textbook policy held by the Court to be constitutional in Board of Education v. Allen (1968). Like it did in Allen, the Court argued in Meek that the textbook loan program did not violate the establishment clause because it provided directly and free of charge to private school students, and not directly to the schools, the same nonreligious texts these children would have received without cost if they had attended public schools.

Court held that other programs violated the establishment clause

However, the Court held that the other programs violated the establishment clause.The instructional materials and equipment, unlike the textbooks, did not go directly to the students but went directly to the nonpublic schools, three fourths of which were religious. This, according to the Court, substantially advanced religion. In addition, the services were performed by state employees on the campuses of the religious schools at the request of the schools’ administrators. Because the public employees working at these religious schools were monitored by public authorities to ensure that the instruction or counseling was nonideological, the Court held that the policy involved unconstitutional church-state entanglement. Finally, because these programs were supported by legislative appropriations and thus likely would involve religious schools lobbying and politicking for these tax dollars, these programs have the potential for infusing and fostering religious divisiveness in the political arena.

Justices disagreed on what part of the statutes were constitutional

Six justices dissented in part and agreed in part with the majority, but they disagreed among themselves on what portions of the statutes should have passed constitutional muster. Three of the six would have held that the entire policy violated the establishment clause. They argued that the potential for religious divisiveness in the political arena, which the plurality had claimed makes the non-textbook portions of the statutes unconstitutional, was no less present in the textbook loan program.

The remaining three agreed with the plurality’s upholding of the textbook loan program, but unlike the plurality, they would have upheld the entire policy as constitutional. They argued that there was no difference between the textbook loan program and the other programs and that there was no evidence in the record that the other programs had the potential for religious divisiveness in the political arena as the other six justices had maintained.

This article was originally published in 2009. Francis J. Beckwith is Professor of Philosophy and Church-State Studies, and Affiliate Professor of Political Science, at Baylor University. A graduate of Fordham University (PhD., philosophy) and the Washington University School of Law, St. Louis (MJS), he has authored numerous academic articles dealing with religious liberty, religious establishment, and bioethics. Among his over one dozen books are Defending Life: A Moral and Legal Case Against Abortion Choice (Cambridge University Press, 2007) and Taking Rites Seriously: Law, Politics, and the Reasonableness of Faith (Cambridge University Press, 2015 ), winner of the American Academy of Religion’s 2016 Book Award for Excellence in the Study of Religion in the category of Constructive-Reflective Studies.