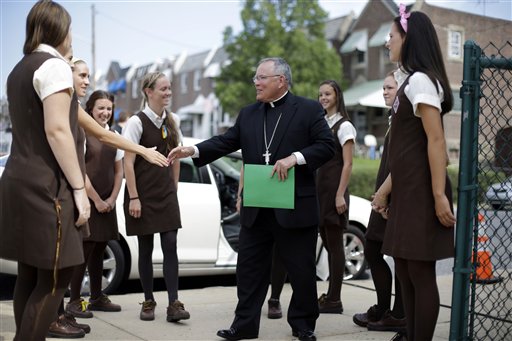 Sloan v. Lemon (1973) struck down a Pennsylvania law that provided tuition support for parents who sent their children to private schools as an unconstitutional violation of the First Amendment. The court found that 90 percent of the children affected went to parochial schools. In this 2012 photo, students greet Archbishop of Philadelphia Charles Chaput before a news conference at Saint Hubert Catholic High School for Girls. (AP Photo/Matt Rourke, used with permission from the Associated Press)

The Supreme Court in Sloan v. Lemon, 413 U.S. 825 (1973), struck down a state law that reimbursed parents for tuition to parochial schools.

The case was decided together with Crouter v. Lemon. The Court issued its decision on the same day that it ruled on Committee for Public Education and Religious Liberty v. Nyquist.

Sloan and Crouter involved the constitutionality of Pennsylvania’s Parent Reimbursement Act for Nonpublic Education, which provided tuition reimbursement to parents who paid for their children to attend nonpublic elementary and secondary schools.

In applying the three-part test that the Court had established in Lemon v. Kurtzman (1971), Justice Lewis F. Powell Jr. stated that the law had the secular purpose of helping children stay in nonpublic schools, where they would cost the state less.

In examining the primary effect of the law, however, he observed that more than 90 percent of the affected children went to parochial schools. Accordingly, he did not think this case could be distinguished from Nyquist, in which the Court had declared that similar aid for tuition and construction costs violated the Establishment Clause.