Witters v. Washington Department of Services for the Blind (1986 ) 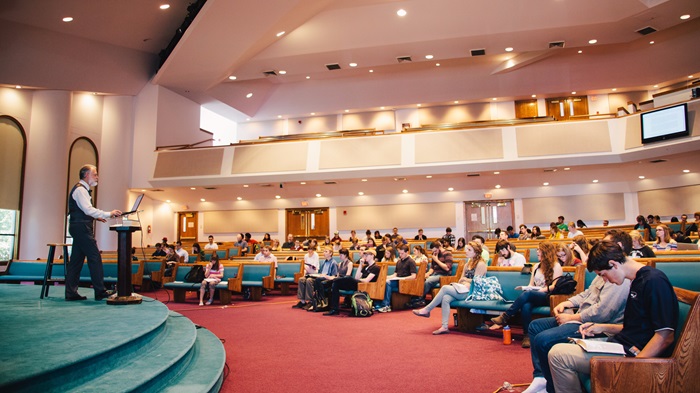 The Supreme Court in Witters v. Washington Department of Services for the Blind (1986) upheld the constitutionality of a Washington state program that provided tuition funds to a disabled man for religious education, finding that the program did not violate the establishment clause of the First Amendment because the funds were disbursed to the man, and not the school. This photo shows the inside of Moody's Bible School in Spokane, Washington, which was the predecessor to the school that Larry Witters sought to attend to study to become a pastor with the state-paid tuition. (Photo from the Moody Bible Institute, which closed part of its programs in Spokane in 2017)

In Witters v. Washington Department of Services for the Blind, 474 U.S. 481 (1986), the Supreme Court upheld the constitutionality of a state vocational rehabilitation program in which the money provided was used to finance education at a sectarian school.

Under a Washington statute, petitioner Larry Witters applied for aid to pay his tuition at Inland Empire School of the Bible to study to become a pastor. He was denied aid on the grounds that the Washington state constitution forbids the state from giving money to sectarian schools.

The Washington Supreme Court upheld the denial of aid but based its decision on the Establishment Clause of the First Amendment. Specifically, the state supreme court held that the program violated the second prong of the Lemon test, finding that the “principal or primary effect” of the regulation had the “primary effect of advancing religion.”

Supreme Court said that aid would not violate First Amendment

Justice Thurgood Marshall delivered the opinion of a unanimous Court. The Court framed the question as whether extension of aid to Witters and his use of that aid to support his religious education is a permissible transfer or an impermissible “direct subsidy.” The Court held that since the aid was distributed to the student and it was the student’s choice to use it at a sectarian school, the program withstood constitutional scrutiny.

It is important to note that the Court based its decision on the record before it at the time. Evidence presented during briefing showed that the practical application of the program may have created an impermissible “symbolic union” between the state and religious schools. However, this argument was not presented to the state courts, and therefore the Court refused to consider it. The Court left it up to the state courts to determine how best to deal with this new evidence on remand.

Justice Lewis F. Powell Jr. filed a separate concurring opinion emphasizing that the Court’s decision was supported by the precedent of Mueller v. Allen (1983). In Mueller, the Court held that neutral state programs that offer aid to a class not defined by religion do not violate the second prong of the Lemon test, because the aid to religion results from the private choices of the aid recipients.

In Locke v. Davey (2004), the Court subsequently allowed states to impose stiffer standards for student aid than that required by the Establishment Clause.