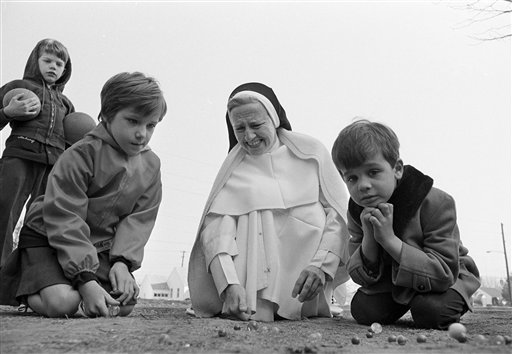 In 1977, the Supreme Court upheld parts of an Ohio statute that provided funds to nonpublic schools, including religious schools, but held other parts of law as an unconsitutional violation of the First Amendment's establishment clause which prevents the state from advancing a religion. The Court in Wolman v. Walter found that providing funds for instructional materials and field trips had the effect of advancing religion. In this photo, Sister Marilyn of a Columbus, Ohio school, Christ the Kind, grimaces on missing a shot as she plays marbles with two of her first grade students in 1969. (AP Photo/Gene Herrick, used with permission from the Associated Press)

In Wolman v. Walter, 433 U.S. 229 (1977), the Supreme Court held that the state of Ohio could provide nonpublic schools with secular textbooks, standardized testing and scoring, diagnostic services, and therapeutic and remedial services, while rejecting aid in the form of instructional materials and equipment and field trip services as violations of the First Amendment’s establishment clause.

The Ohio legislature had implemented a statute to provide aid to nonpublic school students. The statute was challenged by Ohio taxpayers, and a three-judge lower federal court panel found the entire statute constitutional.

Court upheld some aid to parochial schools, but said other violated First Amendment

In its analysis of the case, the Supreme Court applied the three-pronged test established in Lemon v. Kurtzman (1971). At issue was whether the Ohio statute violated the second and third prongs of the Lemon test by advancing religion and creating an excessive entanglement between religion and the government. Unlike the lower court, which upheld the entire statue, the Supreme Court ruled on each provision individually, with justices joining in parts and dissenting in others.

With respect to the state providing textbooks to private schools, the Court, in a majority opinion by Justice Harry A. Blackmun, held this provision constitutional as it was written narrowly to provide only secular textbooks. The Court upheld the constitutionality of supplying standardized tests and scoring, ruling that the state has a legitimate interest in ensuring that its students meet minimum educational standards.

The Court found several provisions of the statute to be unconstitutional. One provision of the Ohio statute supplied instructional materials and equipment to nonpublic schools. Though not specifically defined, this material included projectors, tape recorders, and maps. While these items are neutral in nature, the Court held that they had the effect of providing a direct advancement of religion.

The Court “categorically rejected the notion” (Wood 1979: 75) of the state funding field trip transportation for nonpublic school students as it is the school, not the students, who benefit from such service. The Court also questioned if teachers, who make the field trip meaningful, could remain religiously neutral and if the monitoring of these trips by the government would create an excessive entanglement between the government and religion.

In the numerous concurrences and dissents filed by the justices in this case, five justices did express concerns about the continued utility of the Lemon test, especially with respect to the issue of entanglement.