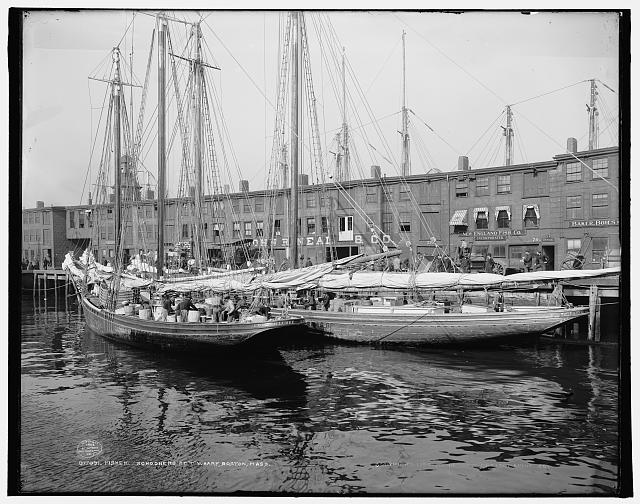 Richardson v. Goddard (1859) said that state days of prayer were not required to be observed after a firm sued for losing cargo they left out on a wharf due to a day of prayer. (Image of the T Wharf in Boston in 1904 via Library of Congress, public domain)

Throughout U.S. history, presidents and governors have issued proclamations of fasting and thanksgiving.

In Richardson v. Goddard, 64 U.S. 28 (1859), the Supreme Court held that such proclamations do not exempt business owners from fulfilling contractual obligations.

Shipment was not collected due to day of prayer and fasting, destroyed

The case revolved around the vessel Tangier, which had landed at Boston to unload bales of cotton promised to the firm of Goddard & Pritchard. In part because the firm had not allowed the last of the shipment to be collected from the wharf because of the state-declared day of prayer and fasting, some bales were destroyed when an accidental fire broke out. Goddard & Pritchard then sued Richardson, the ship’s master, for its losses.

Delivering the opinion of the Court, Justice Robert Cooper Grier ruled that Richardson was not liable for this damage under the prevailing general custom or that of the port of Boston. Grier observed that although it preserved special status for Sunday closing laws, Massachusetts law did not forbid business transactions on days of prayer and thanksgiving.

Grier also noted that England and other Protestant nations had never considered the observance of such holidays to be compulsory and that Massachusetts and other states were “colonized by men who fled from ecclesiastical oppression, that they might enjoy liberty of conscience, and that while they enforced the most rigid observance of the Lord’s day or a Sabbath, or day of ceremonial rest, they repudiated with abhorrence all saints’ days and festivals observed by the churches of Rome or of England.”

Holiday observance was “a privilege, not a duty,” and “it binds no man’s conscience or requires him to abstain from labor.” However many individuals might take the day off, “it never has been the custom that vessels discharging cargo on the wharves of Boston ceased on that day,” and the ship’s master therefore bore no liability for the goods that Goddard & Pritchard had failed to claim on that day.