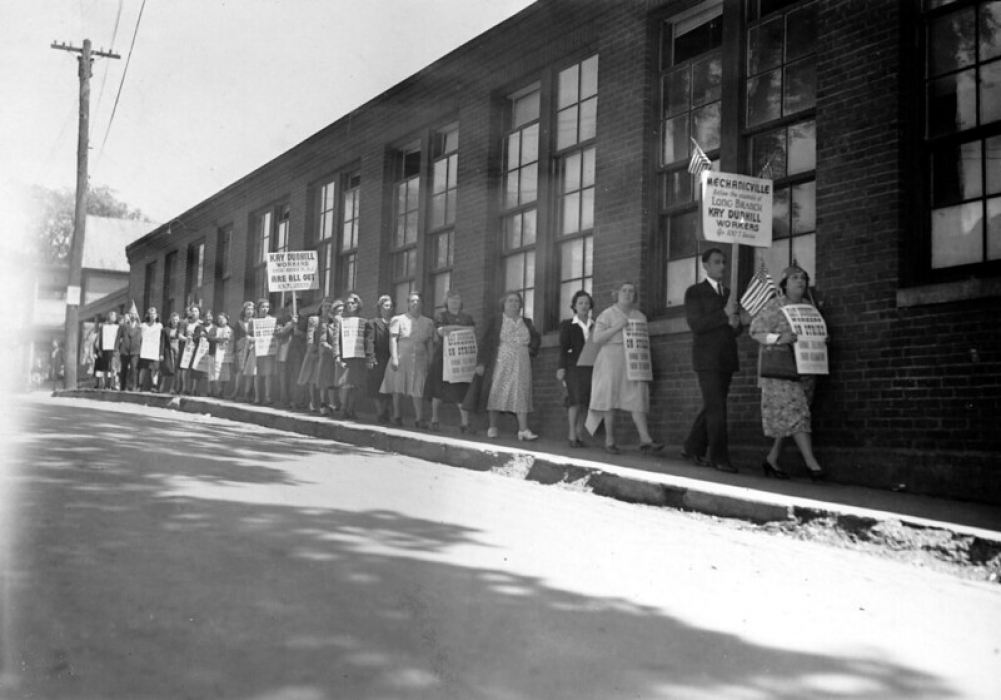 In this May 1941 photo, picketers hold placards that read "Mechanicville follow the example of Long Branch Kay Dunhill workers, 100% union," urging the unionization of  workers in a company. In 1941, the Supreme Court ruled that an Illinois common law policy that prohibited peaceful picketing where there was no immediate employer-employee dispute violated the First Amendment.  "Such a ban of free communication is inconsistent with the guarantee of freedom of speech," wrote Justice Felix Frankfuter. (Photo by The Kheel Center for Labor-Management Documentation and Archives, CC BY 2.0)

In American Federation of Labor v. Swing, 312 U.S. 321 (1941), the Supreme Court held that the state’s common law policy forbidding peaceful persuasion through picketing when there was “no immediate employer-employee dispute” violated freedom of discussion. Swing, who owned a beautyshop, had gone to court to get an injunction against union picketers who were trying to unionize his business.

Ban on peaceful persuasion through picketing violated the First Amendment

Reviewing the complexities of the lower court injunctions and decisions, Justice Felix Frankfurter, in the majority opinion, wrote that these complexities showed “ ‘peaceful persuasion’ disentangled from violence and free from ‘picketing en masse or otherwise conducted’ so as to occasion ‘imminent and aggravated danger.’ ” In such circumstances, he concluded, “Such a ban of free communication is inconsistent with the guarantee of freedom of speech.” He added, “A state cannot exclude workingmen from peacefully exercising the right of free communication by drawing the circle of economic competition between employers and workers so small as to contain only an employer and those directly employed by him.” He thus affirmed, “The right of free communication cannot . . . be mutilated by denying it to workers, in a dispute with an employer, even though they are not in his employ.”

Justice Owen J. Roberts authored a dissent joined by Chief Justice Charles Evans Hughes, arguing that the questions of Illinois procedure were not adequately established by the record for the Court to intervene.