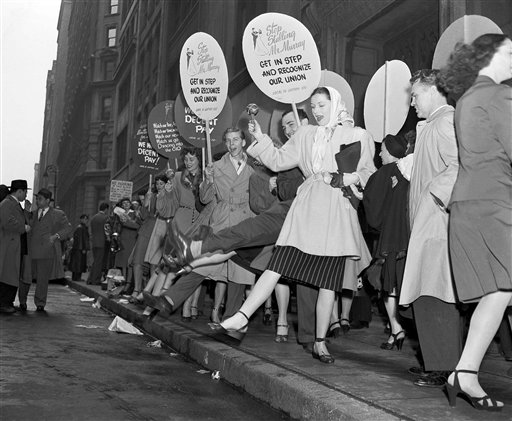 In this photo, girl and men dancing instructors kick out in the Conga as they form a picket line in front of an Arthur Murray dance studio in New York City on May 7, 1947. Prior to Bakery and Pastry Drivers and Helpers Local v. Wohl, 315 U.S. 769 (1942), New York courts had ruled that some peaceful picketing had been unlawful because it did not involve a labor dispute as defined by state law. The Supreme Court disagreed and applied freedom of speech to New York via the 14th Amendment. (AP Photo, used with permission from the Associated Press)

In Bakery and Pastry Drivers and Helpers Local v. Wohl, 315 U.S. 769 (1942), the Supreme Court struck down an injunction against picketers who were protesting peddlers buying from bakeries and selling to small retailers seven days a week in conflict with union policies. In so ruling, the Court applied freedom of speech to New York via the 14th Amendment.

In so writing, Jackson thereby clarified that the Court had denied certiorari to Opera on Tour v. Weber (1941), a similar case, because it was one in which “the question of the existence of a right to free speech under the Fourteenth Amendment was neither raised nor considered.”

Justice William O. Douglas authored a concurring opinion, joined by Justices Hugo L. Black and Francis W. Murphy, in which he observed, “If the opinion in this case means that a State can prohibit picketing when it is effective but may not prohibit it when it is ineffective, then I think we have made a basic departure from Thornhill v. Alabama, 310 U.S. 88 [1940].”

Douglas sought to apply the clear and present danger test to picketing cases and thought that any restrictions on peaceful picketing would have to be drawn more narrowly than the statute under which the injunction had been justified.

Douglas acknowledged that “picketing by an organized group is more than free speech” and can be a proper “subject of restrictive regulation,” but he further noted that because the “ ‘dissemination of information concerning the facts of a labor dispute’ is constitutionally protected, a State is not free to define ‘labor dispute’ so narrowly as to accomplish indirectly what it may not accomplish directly.”