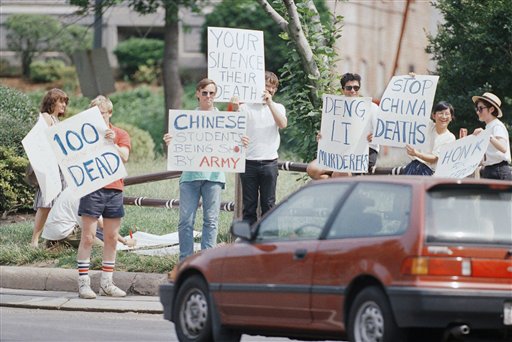 In Boos v. Barry, 485 U.S. 312 (1988), the Supreme Court ruled that a District of Columbia law violated the First Amendment by banning the display of signs criticizing a foreign government outside that government’s embassy. In this photo, demonstrators hold sympathetic to the Beijing protesting students, outside the Chinese embassy on Saturday, June 3, 1989 in Washington, D. C. (AP Photo/Doug Mills, used with permission from the Associated Press)

In Boos v. Barry, 485 U.S. 312 (1988), the Supreme Court ruled that a District of Columbia law violated the First Amendment by banning the display of signs criticizing a foreign government outside that government’s embassy.

Section 22-1115 of the District of Columbia Code contained two provisions concerning protests at embassies. The display clause prohibited signs from being displayed within 500 feet of an embassy if the signs tended to bring the government of the embassy’s country into “public odium” or “public disrepute,” The congregation clause banned any gathering of three or more people within 500 feet of an embassy.

Writing for the Court, Justice Sandra Day O’Connor determined that the display clause of the law was unconstitutional, whereas the congregation clause was permitted as limited by the court of appeals’ interpretation.

O’Connor began her analysis of the display clause by explaining that the prohibited speech — protests of governments — was “at the core of the First Amendment” as it was “classically political speech.” In addition, the law restricted speech in the traditionally public forum of the public sidewalk. O’Connor further found that the ban comprised content-based regulation of speech. For these three reasons, she noted, the display clause would have to pass strict scrutiny to be upheld.

O’Connor specifically compared the statute to an analogous statute passed by Congress, which prohibited intimidating or harassing foreign officials, and noted that the vastly broader application of the display clause, with its outright ban of protest signs, whether intimidating or not, was not narrowly tailored. She expressly avoided addressing whether the law’s purpose — protecting the dignity of foreign diplomats and embassies — was a compelling state interest.

Regarding the congregation clause, O’Connor indicated that the U.S. Court of Appeals for the District of Columbia had determined that it allowed the police to order a congregation of three or more persons outside an embassy to disperse only when the police reasonably believed that such a congregation directed at an embassy posed “a threat to the security or peace of the embassy.”

O’Connor held that with this narrower application, the statute was a restriction only on the place and manner of speech, and was not overbroad or vague as the challengers had argued.

The decision featured a number of concurring opinions, some of which dissented from individual sections of O’Connor’s opinion.