By John R. Vile
Related cases in Antitrust Laws and the First Amendment 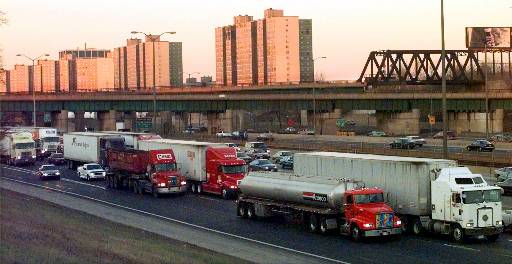 In Eastern Railroad Presidents Conference v. Noerr Motor Freight, Inc. (1961), the Supreme Court held that using the Sherman Antitrust Act to penalize railroad operators for a publicity campaign against truckers violated the First Amendment. In this photo, truck traffic is heavy in Chicago in 1997. (AP Photo/Fred Jewell, used with permission from the Associated Press)

In Eastern Railroad Presidents Conference v. Noerr Motor Freight, Inc., 365 U.S. 127 (1961), the Supreme Court held that use of the Sherman Antitrust Act to penalize railroad operators for restraint of trade for a publicity campaign against truckers violated the First Amendment right to petition.

The campaign by 24 eastern railroads had included use of the so-called third-party technique, whereby propaganda is made to appear spontaneous. As a result of this publicity campaign, the Pennsylvania governor vetoed the Fair Truck Bill, which would have allowed trucks to increase the weight of their loads.

In the unanimous opinion for the Court, Justice Hugo L. Black noted that violations of the Sherman Act could not “be predicated upon mere attempts to influence the passage or enforcement of laws” because the First Amendment’s right to petition protected such actions.

The lower courts had decided that the measures taken by the railroads were illegal because they were designed to destroy truck competition, but Black asserted that “[i]t is neither unusual nor illegal for people to seek action on laws in the hope that they may bring about an advantage to themselves and a disadvantage to their competitors.”

Black acknowledged that the railroads’ campaign fell “far short of the ethical standards generally approved in this country,” but he further observed that insofar as the Sherman Act “sets up a code of ethics at all, it is a code that condemns trade restraints, not political activity.” The evidence demonstrated that the railroads had attempted “to influence the passage and enforcement of laws,” and the First Amendment gave them the right to employ “circulars, speeches, newspaper articles, editorials, magazine articles, memoranda and all other documents” to do so.

Although the lower courts had justified the truckers’ own publicity campaign as an appropriate reaction to the campaign initiated by the railroads, both sides had engaged in a “no-holds-barred fight,” and each “appears to have utilized all the political powers it could muster in an attempt to bring about the passage of laws that would help it or injure the other.”

Black concluded that “the contest itself appears to have been conducted along lines normally accepted in our political system.” The Court would refine this decision in United Mine Workers of America v. Pennington (1965), where it ruled that antitrust laws might apply to cases in which businesses attempted to put others out of business by instituting actions in state and federal proceedings or by deterring their access to such governmental agencies.