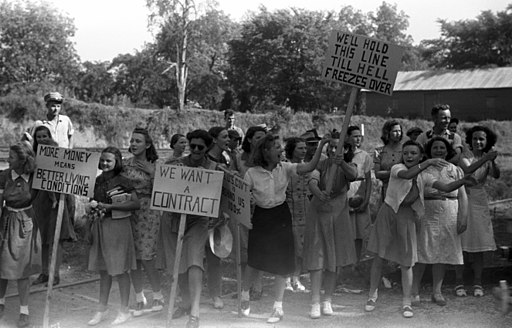 CIO strikers were not uncommon in the 1940s. Here, a group of CIO pickets outside a mill in Greensboro, Georgia, pose for their picture. In Carlson v. California (1940), a picketer carried a sign near a tunnel project on highway protesting the job as unfair to labor unions. He was convicted under an anti-picketing statute. The Supreme Court overturned his conviction, saying carrying a sign or banner was no less protected than waving a flag. (Photo via Library of Congress, public domain)

In Carlson v. California, 310 U.S. 106 (1940), the Supreme Court struck down a Shasta County, California, ordinance that prohibited loitering or picketing "for the purpose of inducing or influencing, or attempting to induce or influence" ... “any person to refrain from doing or performing any service or labor in any works, factory, place of business or employment..."

The case stemmed from an incident involving a group of men who displayed signs on U.S. Highway 99 in front of the Delta Tunnel Project in Shasta County in such a way that passersby and workers on the project could see them.

The appellant, Carlson, carried a sign that said: “This job is unfair to CIO.”  He was arrested and found guilty.

Although the appellant's actions drew no reports of intimidation, coercion, or other acts of violence or breach of the peace, a reviewing state court affirmed his conviction.

In the opinion for the Court, Justice Francis W. Murphy relied largely on the companion decision in Thornhill v. Alabama (1940), which protected peaceful picketing, and on the “sweeping and inexact” nature of the terms loiter and picket, which he believed disclosed “the threat to freedom of speech.”

He further ruled that carrying a sign or banner was no less protected than waving a flag, which the Court had upheld in Stromberg v. California (1931).

Murphy observed that the county had abridged “liberty of discussion under circumstances presenting no clear and present danger of substantive evils within the allowable area of state control.”