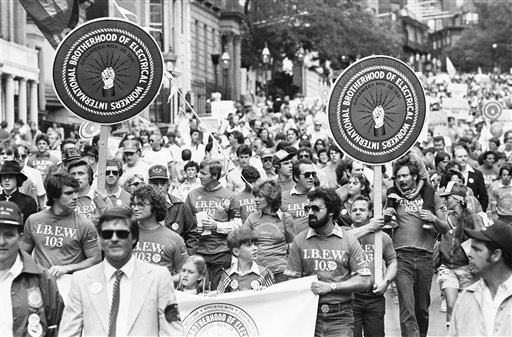 In 1951, an International Brotherhood of Electrical Workers union member illegally picketed a construction site in violation of the National Labor Relations Act of 1947, also known as the Taft-Hartley Act. The Supreme Court upheld the National Labor Relations Act as constitutional, and said that it "carrie[d] no unconstitutional abridgment of free speech." The Court said that as they had recently allowed states to place some limits on picketing, there was no reason Congress could not place similar limits. In this photo, members of the IBEW union march down Beacon Street, in Boston, 1982. (AP Photo/Bill Polo, used with permission from the Associated Press.)

In International Brotherhood of Electrical Workers v. National Labor Relations Board, 341 U.S. 694 (1951), the Supreme Court affirmed the Second Circuit Court of Appeal’s decision that a union’s peaceful picketing had illegally induced a strike designed to force a general contractor’s termination of its contract with a subcontractor in violation of the National Labor Relations Act of 1947.

The case arose after a union agent picketed a construction site on the basis that an electrical subcontractor had employed nonunion men and succeeded in getting another carpentry subcontractor to stop his work. This case was a companion to Labor Board v. Denver Building Trades Council and United Brotherhood of Carpenters v. Labor Board, each of which dealt with unfair labor practices.

In interpreting the provisions of Section 8 (b)(4)(A) of the National Labor Relations Act, which was designed to prohibit actions that “induce or encourage” secondary boycotts, Justice Harold H. Burton, writing for six justices, decided that the language did apply to the legal picket at issue. He observed that this prohibition “carries no unconstitutional abridgment of free speech.” He further observed that “the substantive evil condemned by Congress . . . is the secondary boycott and we recently have recognized the constitutional right of states to proscribe picketing in furtherance of comparably unlawful objectives. There is no reason why Congress may not do likewise.”