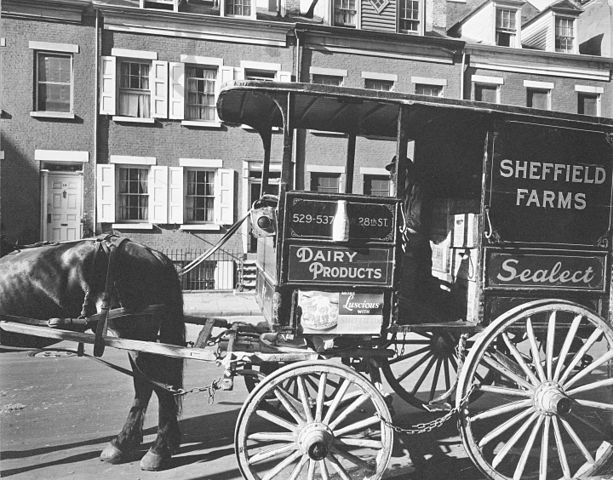 In Milk Wagon Drivers Union v. Meadowmoor, 312 U.S. 287 (1941), the Supreme Court upheld an injunction by an Illinois court against peaceful picketing, which the state court believed was enmeshed in “contemporaneously violent conduct.” The high court did so on the same day it struck down another injunction against peaceful picketing in American Federation of Labor v. Swing (1941). (Image of a milk wagon in New York City in 1936, via New York Public Library, public domain)

In Milk Wagon Drivers Union v. Meadowmoor, 312 U.S. 287 (1941), the Supreme Court upheld an injunction by an Illinois court against peaceful picketing, which the state court believed was enmeshed in “contemporaneously violent conduct.” The high court did so on the same day it struck down another injunction against peaceful picketing in American Federation of Labor v. Swing (1941).

Court took violence into account when they enjoined picketing

In the opinion for the Court, Justice Felix Frankfurter surveyed the vendor system that had governed the distribution of milk in Chicago and that had given rise to the controversy. Noting that the Court had included picketing under the ambit of First Amendment rights in Thornhill v. Alabama (1940) and Carlson v. California (1940), Frankfurter argued, “Peaceful picketing is the workingman’s means of communication.” But, likening free speech to appeals to reason, he further observed that “utterance in a context of violence can lose its significance as an appeal to reason and become part of an instrument of force.” The controversy over milk distribution had resulted in numerous acts of violence, and the Court found that the state courts had the right to take such violence into account when they enjoined picketing in this case.

Justice Hugo L. Black wrote a dissenting opinion, joined by Justice William O. Douglas, in which he argued that the injunction was a serious infringement of freedom of speech and press. He observed: “Freedom to speak and write about public questions is as important to the life of our government as is the heart to the human body.” To support his position, he advanced five arguments:

Black thought the injunction could be considered prior restraint

Under the last point, Black stressed that the injunction could be interpreted as serving as a prior restraint of further discussion. As to the link between picketing and violence, Black argued that it was too attenuated: “It was eight months after this [violence] before any picketing occurred; four years afterwards before the trial judge granted an injunction, limited to violence alone; five years before the Supreme Court of Illinois directed a more stringent injunction against peaceful persuasion; and seven years before this Court sustained the injunction.” If the state wanted to prevent violence, it should direct its action directly to that violence.

Justice Stanley F. Reed authored another dissent, arguing that picketers should not have lost their rights because of the violent actions of others. He concluded: “If the fear engendered by past misconduct coerces storekeepers during peaceful picketing, the remedy lies in the maintenance of order, not in denial of free speech.” He further observed that “[f]ree speech may be absolutely prohibited only under the most pressing national emergencies,” which he did not think were at issue here.