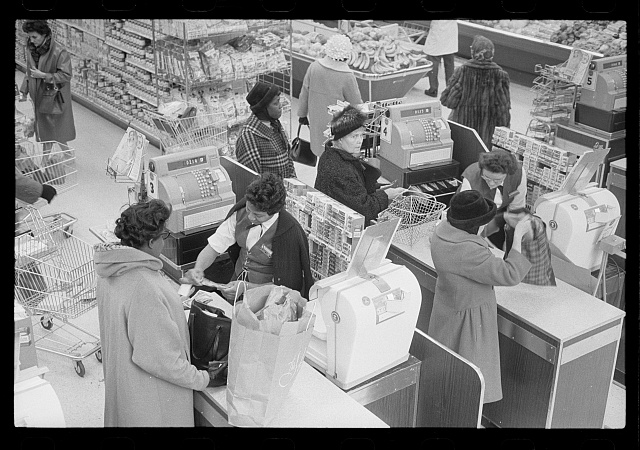 In National Labor Relations Board v. Fruit and Vegetable Packers, 377 U.S. 58 (1964), the Supreme Court protected the rights of picketers, reaching its decision on statutory grounds under the National Labor Relations Act (NLRA) rather than relying on First Amendment protections. The NLRB had decided that pickets at a Safeway against buying apples constituted an unfair labor practice under 8(b)(4) of the NLRA. The Supreme Court disagreed. In this photo, consumers buy chickens at a Safeway store in 1965. (Image via Library of Congress, no known restrictions)

The Court protected the rights of pickets against buying apples

The Court’s decision vacated a federal appeals court decision that had set aside an order by the National Labor Relations Board (NLRB). The NLRB had decided that pickets at a retail food outlet (Safeway) against buying apples constituted an unfair labor practice under 8(b)(4) of the NLRA; the federal appeals court said that ruling could stand only if it showed a substantial economic impact on the stores in question and remanded for a finding on that issue.

Court said this picketing was constitutional

Writing for the majority, Justice William J. Brennan Jr. focused on an interpretation of the NLRA, noting that the picketers in this case had not tried to dissuade customers from doing any business at the retail outlet — just from buying apples from the business. By Brennan’s analysis, the NLRA was not designed to prevent all secondary boycotts but only those in which the boycotts resulted in substantial harm to the secondary business. He observed that “it is a familiar rule, that a thing may be within the letter of the statute and yet not within the statute, because not within its spirit, nor within the intention of its makers.” He continued, “Peaceful consumer picketing to shut off all trade with the secondary employer unless he aids the union in its dispute with the primary employer, is poles apart from such picketing which only persuades his customers not to buy the struck product.”

Justice Hugo L. Black wrote a vigorous concurring opinion, highlighting what he believed to have been First Amendment issues overlooked by the NLRB. Black observed that picketing embraced the concepts of “patrolling” and “speech.” Although the former was not speech, when unprotected conduct such as patrolling is “intertwined” with constitutionally protected free expression (picketing), regulation of the nonprotected conduct may violate the First Amendment. He thought that the government was restricting picketing so as to interfere with the picketers’ message. Black distanced himself from the dissenters who thought the actions did not constitute restrictions of freedom of speech and press simply because other means of communication remained.

Dissenters disagreed about the intent of the NLRA

In dissent, Justice John Marshall Harlan II, joined by Potter Stewart, said he believed the NLRA had intended to prevent all secondary consumer picketing. He thought the actions at issue clearly fell within the letter of the law. Harlan argued that “picketing is ‘inseparably something more [than] and different’ from simple communication.” He continued, “Congress has given careful and continued consideration to the problems of labor-management relations, and its attempts to effect an accommodation between the right of unions to publicize their position and the social desirability of limiting a form of communication likely to have effects caused by something apart from the message communicated, are entitled to great deference.”

Justice William O. Douglas did not participate in this case.