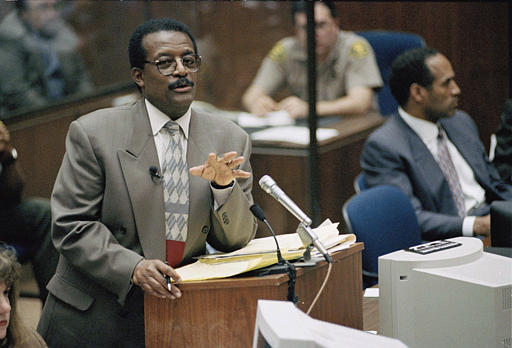 The Supreme Court in Tory v. Cochran, 544 U.S. 734 (2005), vacated and remanded a decision by California courts that had issued a permanent injunction against Ulysses Tory and others who were picketing against famous lawyer Johnnie L. Cochran Jr. Tory claimed that the injunction infringed on his free speech rights under the First Amendment. In this photo, O.J. Simpson defense attorney Cochran is shown in a Los Angeles courtroom. (AP Photo/Pool/Reed Saxon, used with permission from the Associated Press)

The Supreme Court in Tory v. Cochran, 544 U.S. 734 (2005), vacated and remanded a decision by California courts that had issued a permanent injunction against Ulysses Tory and others. Tory claimed that the injunction infringed on his free speech rights under the First Amendment.

Tory was a former client of well-known attorney Johnnie Cochran, one of the principal attorneys defending former football star O. J. Simpson in his murder trial. Tory falsely claimed Cochran owed him money. The trial court determined that Tory had “engaged in a continuous pattern of libelous and slanderous activity,” with the apparent intention of coercing Cochran to pay him to desist. The court’s injunction forbade Tory and others from picketing, displaying signs, and making oral statements about the attorney or his law firm “in any public forum.”

Court said case was not moot, even after Cochran's death

After the Court had heard oral arguments on “whether a permanent injunction as a remedy in a defamation action, preventing all future speech about an admitted public figure, violates the First Amendment,” Cochran died. His counsel moved to substitute his widow in his place and asked that the Court dismiss the case as moot. Although Justice Stephen G. Breyer, writing for the Court, agreed to the substitution, he decided the case was not moot since he could find nothing in California law that suggested that the injunction ceased upon a party’s death; therefore, the parties against whom it was issued would have no way of knowing whether it was still in force.

Breyer found “(1) that the First Amendment forbids the issuance of a permanent injunction in a defamation case, at least when the plaintiff is a public figure, and (2) that the injunction (considered prior to Cochran’s death) was not properly tailored and consequently violated the First Amendment.” Breyer did determine that “the injunction, as written, has now lost its underlying rationale,” since Cochran could no longer be coerced. He observed that “the injunction, as written, now amounts to an overly broad prior restraint upon speech, lacking plausible justification.”

Justice Clarence Thomas wrote a dissent, joined by Antonin Scalia, in which he argued that the Court should “dismiss the writ of certiorari as improvidently granted.” Thomas thought that Cochran’s death “renders the case an inappropriate vehicle for resolving the question presented.” He observed that the status of the injunction under the new circumstances was a matter for state courts to resolve and that the state courts “might very well adjudge the case moot or the injunction invalid on state-law grounds rather than the constitutional grounds the Court rushes to embrace.”