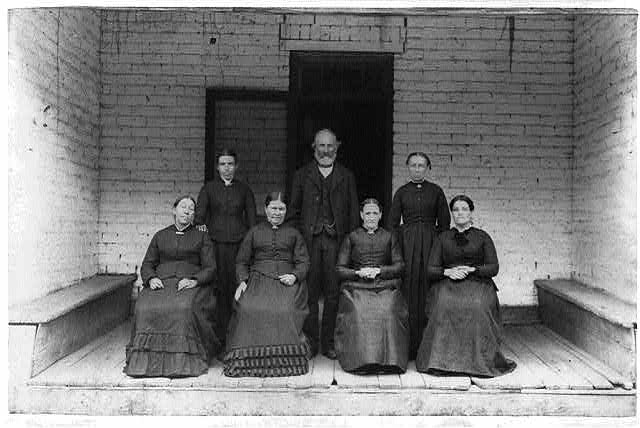 In Murphy v. Ramsey, 114 U.S. 15 (1885), the Supreme Court upheld a federal law that denied polygamists the right to vote. Murphy reaffirmed the Court’s decision in Reynolds v. United States (1879), permitting legislation against polygamy. In this circa 1885 image, a Mormon poses with his six wives. (Image via Library of Congress, public domain)

Polygamists were not allowed to vote

Congress had adopted a law for the territories limiting such voting at a time when the practice of polygamy was primarily associated with Mormons. Murphy and other Mormon petitioners, in turn, challenged the act of voting registrars in denying them this right.

Justice Stanley Matthews wrote the Court’s unanimous decision upholding the law against charges that it was an ex post facto provision. Matthews argued that individuals were not being punished under the law for having entered into polygamous relationships but for sustaining them after the law was adopted. Matthews did not specifically address First Amendment issues, but he made it clear that Congress had the right to predicate voting on family relationships. Matthews observed that “the idea of the family, as consisting in and springing from the union for life of one man and one woman in the holy estate of matrimony” was “the sure foundation of all that is stable and noble in our civilization” and “the best guaranty of that reverent morality which is the source of all beneficent progress in social and political improvement.” Matthews’ arguments indicate that he believed regulation of such family relationships was within the province of government, despite the religious beliefs of those participating in alternative relationships.