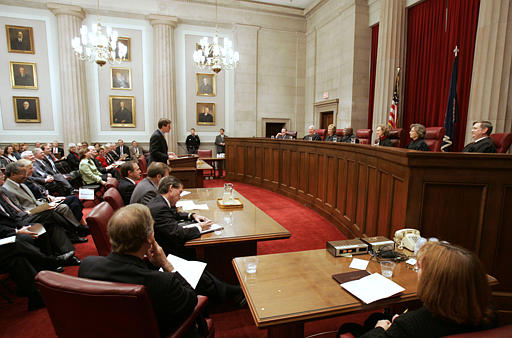 The Virginia Supreme Court upheld the conviction of the Virginian Pilot after it published the identity of a judge who was the subject of a judicial commission's investigation. The state law prohibited divulging information about confidential proceedings of such judicial commissions. However, the U.S. Supreme Court said the state law violated the freedom of the press clause of the First Amendment. In this photo, the Virginia Supreme Court marks its 225th anniversary in 2004. (AP Photo/Steve Helber, used with permission from the Associated Press)

In Landmark Communications, Inc. v. Virginia, 435 U.S. 829 (1978), the Supreme Court found that the conviction of a newspaper owner for publishing information regarding the Virginia Judicial Inquiry and Review Commission violated the First Amendment’s freedom of the press clause.

The newspaper had reported on a pending commission inquiry and had identified the state judge being investigated.

The Virginia Supreme Court concluded that the law protected judges’ reputations against “adverse publicity which might flow from frivolous complaints,” maintained confidence in the judicial system by “preventing the premature disclosure of a complaint before the commission has determined that the charge is well founded,” and protected complaints and witnesses from “possible recrimination.” The state argued that confidentiality was essential to the effective working of the commission.

In the opinion for six members of the Court, Chief Justice Warren E. Burger limited his review to the narrow question of “whether the First Amendment permits the criminal punishment of third persons who are strangers to the inquiry, including the news media, for divulging or publishing truthful information regarding confidential proceedings” (in this case, of the commission).

He observed that the publication at issue “lies near the core of the First Amendment.” It involved governmental affairs and the public interest. Granting that confidentiality served “legitimate state interests,” the state still needed to show that such interests were “sufficient to justify the encroachment on First Amendment guarantees.”

Burger cited a number of cases, beginning with New York Times Co. v. Sullivan (1964), in which the Court ruled that interest in protecting the reputations of public officials was insufficient to protect “speech that would otherwise be free.”

Although the Virginia Supreme Court had sought to justify its ruling under the clear and present danger doctrine, Burger found that it had improperly accepted state legislative judgments on the issue rather than coming independently to such a conclusion.

Threat needed to be greater to constitute 'clear and present danger'

Precedents such as Bridges v. California (1941), Pennekamp v. Florida (1946), Craig v. Harney (1947), and Wood v. Georgia (1962) indicated that the threat would have to be greater than that in this case to constitute a clear and present danger.

In a concurring opinion, Justice Potter Stewart argued that although the law did not violate the Constitution, such a law could not legitimately punish newspapers: “Though government may deny access to information and punish its theft, government may not prohibit or punish the publication of that information once it falls into the hands of the press, unless the need for secrecy is manifestly overwhelming.”